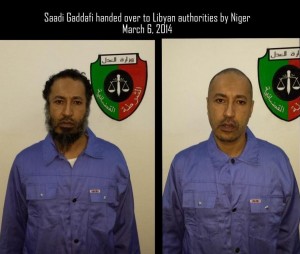 Saadi Qaddafi in jail in Tripoli shortly after his handover by Niger in 2014 (Photo: Archives).

Saadi Qaddafi, son of former Libyan dictator Muamar Qaddafi, was released from prison in Tripoli yesterday. Libyan media sources reported that he flew immediately to Istanbul on a private plane where he will transit to Cairo to be reunited with his mother Safia Ferkash.

Safia Ferkash, Muamar Qaddafi’s widow and second wife, has been residing in Cairo.

Saadi was acquitted by a Tripoli court as far back as 2018 of the charge of killing Al-Ittihad player and coach Bashir Al-Riyani in 2005.

It is believed that there had also been attempts to charge Saadi for criminal and misdemeanour cases related to “kidnapping, defilement, serious harm, abuse of position, and support and financing of armed groups to eliminate the February Revolution.”

The charges also included “bringing mercenaries and identifying cities opposed to the former regime with numbers and signs that led to the destabilization of security and stability in the country.”

It will be recalled that during Libya’s 2011 February revolution that overthrew the Qaddafi regime, Saadi had fled to neighbouring Niger where he sought asylum. Niger eventually extradited Saadi to Libya in March 2014 and Saadi had been held at Al-Hadba prison in Tripoli ever since.

Commenting this morning, the Abd Alhamid Aldabaiba government said Saadi’s release was in implementation of a judicial decision issued two years ago in cooperation with the Public Prosecutor’s Office. It added that Saadi was handed over to his family in accordance with legal procedures.

The government went on to say that it ‘‘affirms its commitment to its pledge to work on releasing all prisoners whose legal conditions require that without exception and hopes that such efforts will be in the path of comprehensive national reconciliation, which is based on law enforcement and respect.”

Tweeting this morning on Saadi’s release, Prime Minister Aldabaiba said “We cannot move forward without achieving reconciliation or establishing the state without achieving justice, enforcing the law, respecting the principle of separation of powers, and following judicial procedures and rulings. On this basis, the citizen Saadi Qaddafi was released today, in implementation of his release order issued by the Public Prosecution.”

Saadi Qaddafi appears in video interview from within jail – claims he is treated well | (libyaherald.com)

Saadi Qaddafi will not be in court tomorrow | (libyaherald.com)