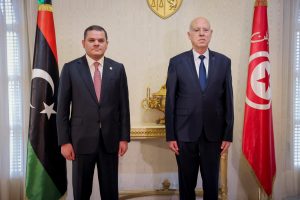 The Libyan-Tunisian borders will be reopened next week, according to the Official Libyan Government Spokesperson Mohamed Hamuda yesterday.

Hamuda stated that ‘‘It was agreed to reopen the borders and resume air traffic during the next week, according to the unified health protocol between the Libyan and Tunisian sides.’’

Aldabaiba’s visit to Tunisia follows Libya’s unilateral closure of its borders with Tunisia because of the Coronavirus – without consultation. It also follows tit-for-tat accusations by both countries as to which country was exporting terrorists/terrorism to the other.

When Libya announced the reopening of its land and air borders with Tunisia, Tunisia failed to reciprocate.