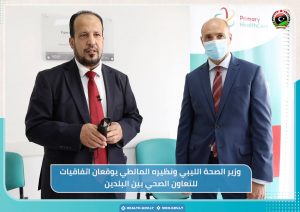 Libya’s Minister of Health, Ali Al-Zanati, and his Maltese counterpart, Chris Fern, signed a health cooperation agreement between the two countries. This came during the Libyan Prime Minister Abd Alhamid Aldabaiba’s visit to Malta on Friday.

The agreement included training a number of medical and paramedical personnel and sending Libyan patients for treatment to Maltese hospitals for treatment in the specialties of oncology, paediatrics, orthopaedics and neurology.

It also included cooperation in the management of hospitals and health centres in Libya, with the aim of localizing treatment, and agreeing on the arrival of several Maltese consultants to Tripoli, Benghazi, Misrata, Sabha and other Libyan cities, to perform some complex surgeries.

For his part, the Libyan Health Ministry reported that the Maltese Minister of Health expressed his happiness to cooperate with the Libya in many health files.