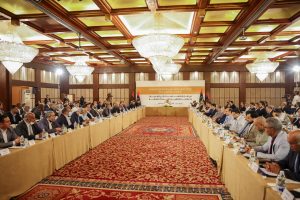 Local Councils and Municipalities celebrated Monday at a Tripoli event the transfer of more powers to them, including revenue earning, from central government (Photo: GNU).

Municipalities across Libya have continued to welcome and celebrate the efforts of the Libyan Prime Minister Abd Alhamid Aldabaiba in transferring competencies to them, including allowing them to earn revenues at the local level.

On 6 September Municipalities and Councils gathered in Tripoli at an event attended by the Prime Minister to celebrate the move. On Sunday they held another meeting at the Municipality of Tripoli Central.

Local Councils/Municipalities have called it a step in the right direction in administrative decentralization and in achieving comprehensive spatial development. These moves came in the implementation of Law No. 59 of 2012 and 330 of August 2021.

Zuwara Municipality said it reflects the desire in bringing about real comprehensive spatial development across Libya and bring local governments closer to their citizens to improve offered services.

It said the move reduces corruption and the waste of public money practiced in some central institutions and reduces the failure by central government to provide the required local services.

Zuwara Municipality said that the move for further decentralization also undermines attempts of division and separation that some are calling for, as a result of the failures of central government.

Government was late in introducing decentralization

It added that there is no doubt about the efficacy of this move and that the reason for the crises that Libya has undergone lies in the despicable centrality in its administration.