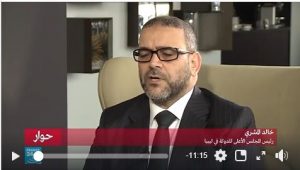 Head of the HSC Khaled Mishri (Photo: From HSC archives).

In its latest obstructionist move to delay the holding of timely elections on 24 December this year, the unelected High State Council (HSC) announced that it had published alternative proposals based on which elections should be held.

First, speaking at a press conference in Tripoli today, HSC head Khaled Mishri announced that the HSC has agreed on a constitutional basis for the holding of the 24 December elections.

This is based on the fact that the Libyan Political Dialogue Forum (LPDF) Roadmap prescribed that the 24 December elections must be held on a constitutional basis. This is to give legitimacy to outcomes of the elections.

Late in the day, after receiving much criticism for delaying tactics, and after the House of Representatives ‘‘issued’’ its law for electing the president, Mishri announced that the HSC has sent proposals to the HoR of its own laws for electing parliament and the president.

In its new proposal for the parliamentary elections, the HSC has proposed that two chambers are chosen – an unelected House of Lords as well as an elected House of Commons.

No unilateral law by HoR

Mishri reiterated the HSC’s objection to the election law for the president ‘‘passed’’ by ‘‘a group and not all’’ of HoR members. He reiterated that as far as the HSC is concerned, the 2015 Skhirat Libyan Political Agreement (LPA) is still applicable and is not superseded by any other authority.

The LPA prescribes that the HoR can only pass major laws in consensus with the HSC – through their joint committee. It follows that since the HoR ‘‘passed’’ its election law for the president unilaterally, the HSC deems it invalid.

Mishri said the HSC objected particularly to the sections in the HoR presidential election laws on the appointment of those holding current top sovereign or military positions. He said the HSC wanted those in such positions wishing to take part in the next elections to give up their current posts for a longer period of years as opposed to the three months proposed by the HoR.

The HSC also objected to the holders of high position being able to return to their old posts if they lose in the elections.

Put another way, Mishri was objecting to HoR head Ageela Saleh tailoring the presidential election law to fit himself and Khalifa Hafter – while holding their current positions for themselves if they lose in the election contest.

Mishri said the HSC proposes that elections for the country’s president be postponed as they would be too divisive. He also feared that they concentrated too much power in the hands of the president which could make the president effectively a dictator.

Mishri insists HSC is not obstructionist

Mishri objected to accusations that his unelected body has been obstructionist and practicing clever filibustering tactics to avoid elections. He insisted he and the HSC are keen for the 24 December elections to be held on time. However, to prove the HSC’s goodwill, Mishri said the HSC is prepared to meet the HoR on different levels of seniority – including a summit with Ageela Saleh – anywhere in the world – locally or internationally.

The HoR election law is unsafe

Finally, Mishri pointed out that the HoR election law for Libya’s next president was not voted on on the floor of the HoR but was sent by HoR head Ageela Saleh directly to HNEC without a final vote on the floor. Mishri considers this law invalid.

Ultimately, Mishri warned that if the HoR insists on continuing its unilateral path – it will not be able to implement its unilateral laws in western Libya. In other words, while the HoR and Hafter may be the power on the ground and are able to hold elections in eastern – and maybe some parts of southern Libya – they will not be able to hold elections in western Libya.