Aldabaiba bullish in continuing in government until delivery of elections – attacks the evil obstructers who want war and destruction: Report and analysis 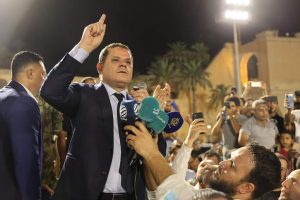 Speaking in Martyr Square, Prime Minister Aldabaiba vows, after the HoR’s vote of no confidence, to continue to serve the people who he said were the source of legitimacy. He said the HoR’s term will come to an end (Photo: GNU).

Reacting to the vote-of-no-confidence earlier in the day at two separate public events yesterday, Prime Minister Abd Alhamid Aldabaiba came out fighting with several bullish statements attempting – and to an extent succeeding – to turn public opinion (even further) against parliament (the House of Representatives – HoR).

He vowed to continue to serve the people and said he was for peace and not war. Speaking last night to a relatively small and hastily formed crowd in the hundreds and not thousands in Tripoli’s Martyrs Square, he said all Libyans across the country support the government and that his government will bring the people to free and fair elections.

Initial reports indicate that there were reports of demonstrations against the HoR decision in at least four other cities and towns in central and eastern Libya.

Aldabaiba said legitimacy is for the people to decide and attacked the evil obstructors who want war and destruction.  They don’t want life for Libyans, he added. And as the gathered crows started to shout insults at the HoR and calling for its ‘‘downfall’’, Aldabaiba said we must not generalise as there were honourable men in the HoR who were coming to meet him.

To the shouts of ‘‘the people want the downfall of parliament’’, Aldabaiba assured ‘‘it will fall. It will be brought down. It should serve the people’’. He added that the no-confidence-vote was ‘‘not legal, not constitutional and not moral’’.

At which point the crowd shouted ‘‘Ageela you coward (look at) Adabiba (who) is here in the square’’.

‘‘We will lead you to fair elections and you will decide at the elections.’’, he added, before concluding by calling on the public to come out and demonstrate on Friday from all over Libya.

On another level, the Spokesperson for the High State Council, Mohamed Abdel Nasser said ‘‘The High State Council rejects the procedures for withdrawing confidence from the Government of National Unity, and considers them null and void for violating the Constitutional Declaration and the (2015 Skhirat Libyan) Political Agreement, and considers everything that results from them void.’’

Meanwhile, 39 HoR members released a statement declaring that the withdrawal of confidence motion does not reflect the will of the House of Representatives and will lead the country to a constitutional crisis.

In a televised statement issued in Tripoli, 65 mayors affirmed their categorical rejection of the House of Representatives’ withdrawal of confidence from the government, describing the move as a violation of the Constitutional Declaration, the (2015 Skhirat) Libyan Political Agreement (LPA) and the Libyan Political Dialogue Forum’s (LPDF) Roadmap.

They said the move aimed at provoking chaos and obstructing the 24 December, adding that parliament does not have the legal or political right to vote alone on the withdrawal of confidence.

HoR members questioning the process and results of the vote

On Libyan media airwaves, HoR members queued to have their say on the vote-of-no-confidence. Worryingly, several members questioned the real motive and the process of the vote.

Member of the Legal Committee of the House of Representatives, Mohammed Rashid said ‘‘The desire to withdraw confidence has nothing to do with the level of government performance, and the motive for it is settling accounts with the Prime Minister because he did not submit to the demands of those who withdrew it from him, the most important of which is the appointment of a defence minister from their side.

Researching and talking about legal matters and procedures in the current parliament is futile and a waste of time.’’

Member of Parliament (and head of the Union of Chambers of Commerce) Mohamed Raied said ‘‘Withdrawing confidence from the government requires 120 votes, which is the prescribed majority, not 89 votes according to the law.’’

Member of the House of Representatives, Muhammad Arifa said ‘‘A major fraud took place during the vote counting process, and those who approved the withdrawal of confidence did not exceed 70 deputies.’’

On the other hand, while HoR member Abdel Moneim Balkour did not question the numbers or the needed threshold of the vote, he questioned the process.

He said that withdrawing confidence from the government requires 87 votes, and the organizing regulations impose a secret ballot mechanism, and this did not happen in today’s session

We agreed to form committees to monitor the work of the government, and today we were surprised by the vote to withdraw confidence, which plunged the country into a crisis

From creating an investigative committee on Monday to vote-of-no-confidence on Tuesday – what happened?

There seems to be much confusion as to what happened behind the closed doors HoR sessions on Monday and Tuesday.

From plan A to plan B

Piecing together what HoR members have been saying, it transpires that the anti-Aldabaiba HoR bloc went into Monday’s session with plan A, which was to withdraw confidence from the government. However, faced with the fact that there was no quorum in the House, they abandoned attempts to force the vote-of-no-confidence – forcing them to abandon plan A.

As a second-best option, the anti-Aldabaiba bloc resorted to plan B, which was to create a committee to investigate the government. And with that Monday’s session was ended.

It is for this reason that members were briefing various Libyan media outlets at the end of Monday’s session that it was unlikely that the government would lose the vote of confidence.

Tuesday – back to plan A

HoR members have been reporting that they expected the House to move on to other business on Tuesday and that they were surprised and ambushed by proceedings when the vote-of-no-confidence motion was put to the vote.

Many of them have been filling the airwaves casting doubt on the validity of the votes. They question the true number of members present in the House and the alleged members who voted for and against the no-confidence motion. There is also the ongoing debate as to what constitutes a quorum and what threshold is needed for which type of motion.

There is confusion and conflict as to which process is now dominant: the 2015 Skhirat Libyan Political Agreement (LPA) or the Libyan Political Dialogue Forum’s (LPDF) Roadmap based on Berlin 1 and 2?

Why behind closed doors

Both Monday and Tuesday’s sessions were conducted behind closed doors and were not transmitted live on air. At least one member has challenged Ageela Saleh to transmit the recordings of the session insisting there was not the required majority for the vote of no confidence to win through.

A cloud over the voting process?

With such a monumental vote, the question must be asked: Why did Saleh insist on holding the sessions behind closed doors? How come when it came to other important sessions on endorsing the Aldabaiba government, on the 2021 budget and on questioning the government – were the sessions deemed important enough to be transmitted live – yet not for Tuesday’s vote-of-no-confidence session? What was Saleh’s real aim, and did he arrive with a good will on the outset, or did he plan for this whole chaotic and contested process?

The net result of the affair?

Ultimately, the vote-of-no-confidence has muddied the Libyan political process even further – if that is still possible. It has added yet another layer of questioned and contested legitimacy and authority.

A caretaker government: is there a real difference?

Libya is a country where legality, legitimacy and constitutionality is very relative. One can argue that nearly every government since 2011 has a legitimacy deficit – and so does the HoR. Where does the 2011 Transitional Constitutional Declaration (and its amendments) end and where does the 2015 Skhirat Libyan Political Agreement (LPA) and Berlin 1 / 2 / Libyan Political Dialogue Forum’s (LPDF) Roadmap start – is open to debate ad infinitum.

In reality, the Aldabaiba government will carry on as usual, but the HoR hopes the caretaker government label gives it some kind of legal/constitutional/political cover against any international contracts or agreements Aldabaiba signs.

In reality, short of cutting off oil supplies from the east through Hafter, the HoR has little leverage on the Libyan government. The National Oil Corporation, the Central Bank of Libya and the Audit Bureau are all based in Tripoli – and added to a few aligned militias – these are all the Aldabaiba government needs to continue to operate. The HoR is physically and geographically marginalised. It cannot operate without the government – but the government – as happened under Serraj – can operate in Tripoli without the HoR.

Loss of confidence between government and HoR

The vote-of-no-confidence has definitely cut off the umbilical cord of good will between the Aldabaiba government and the HoR. The short honeymoon period is over and the phoney support of a large group of HoR members has now been exposed for their insincerity.

Many HoR members see the equation between them and the government as a zero-sum-game. If the government is seen to be successful, this casts them in the failed light that they surely have been in since their election in 2014.

The HoR is embarrassed by the Aldabaiba government which is now perceived to be achieving more in seven months than the HoR in seven years.

Opportunity for internal and external disrupters?

This trust gap between the government and the HoR presents yet another opportunity to disrupters and enemies of Libyan stability – internally and externally – to step in and destabilise Libya further.

The crisis sends negative vibes about Libya just as some good news was beginning to dominate the headlines.

Increased loss of legitimacy of HoR

What the vote-of-no-confidence does ensure is the increased loss of confidence in the HoR by its electorate – as witnessed by the already small countrywide demonstrations and the campaign on social media.

The continued instability in Libya also serves to add to the narrative that democracy is not what it has been made up to be and that the alternative to democracy might be a more successful and suitable model for Libya.

It seems the status quo forces of Libya are determined to hold Libya back and prevent it from moving forward from its current interim stage. Every time elections become a possibility – something out of the blue brings the process to a halt or a reversal.

They are determined to keep the government weak and lacking legitimacy and authority – so that it is unable to serve its people and fulfil their basic needs.

Since 2011, various internal and external forces have conspired to resist change and progress in Libya. The question must be asked: who stands to gain internally and externally from Libya continuing to be stuck in its present political quagmire?

The HoR by its actions making the case for elections

One thing the vote-of-no-confidence has ensured is the increased louder calls for the necessity to hold elections by 24 December so that Libyans can get rid of their rotten political elite: government, parliament, High State Council, the Governor of the Central Bank of Libya and the head of the Audit Bureau. Libya needs a clean sweep, a renewal of legitimacy and authority of its political elite.

Hence the more ineffective and corrupt the political elite act – the more insistent calls there are for elections. The HoR’s latest contested manoeuvre could then be seen as yet another self-administered nail into its own coffin.