BREAKING: Hafter steps down temporarily as Commander-in-Chief from 23 September to 24 December – in preparation for elections? 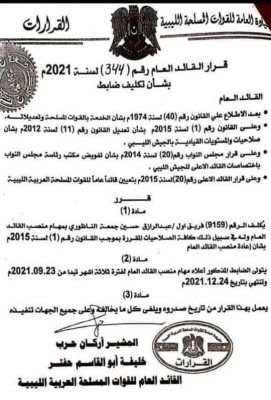 Khalifa Hafter steps down as Commander-in-Chief of the LAAF for three months to run for the 24 December 2021 Presidential elections (LAAF).

Khalifa Hafter has stepped down temporarily as Commander-in-Chief of the Libyan Arab Armed Forces (LAAF) for three months from 23 September to 24 December 2021, the Information Office of the General Command of the Arab Libyan Armed Forces reported today.

The news finally ends speculation as to whether Hafter would stand personally in the planned Presidential elections on 24 December 2021 or would step aside in a deal to allow House of Representatives Speaker Ageela Saleh to run, or to back another proxy.