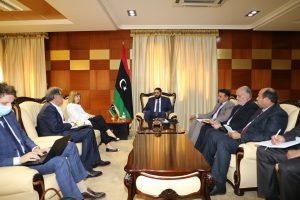 Libya’s Deputy Minister of Economy and Trade for Commercial Affairs, Suhail Abushiha, met on Tuesday at the Ministry’s headquarters, French Ambassador to Libya, Béatrice le Fraper du Hellen accompanied by the commercial attaché of the embassy, ​​in the context of activating and developing economic and commercial cooperation between the two countries.

The meeting discussed ways to enhance cooperation between the two countries in the fields of trade and investment, providing banking facilities and logistics services, and the possibility of resuming air traffic that would contribute to facilitating commercial transactions between economic activities in both countries.

The Ministry reported that Abushiha noted that France is one of Libya’s most important trading partners in the European Union. He also expressed the readiness of the Ministry of Economy and Trade to cooperate and provide possible facilities for French companies and institutions to enter the Libyan market and to market French products that are characterized by quality and are accepted by the Libyan consumer, with the aim of raising the volume of commercial exchanges, which witnessed a noticeable decline during the past years.