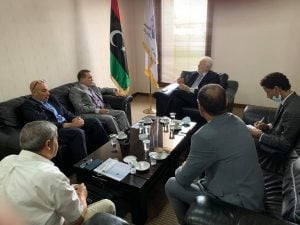 The Libyan Business Council (LBC) and the Maltese embassy reached several agreements and understandings to improve business relations between the two countries.

These followed on from yesterday’s meeting between the head of the LBC, Abdalla Fellah, and Maltese Ambassador, Charles Saliba at Bab Al Bahr Hotel, which included the Maltese Consul, Sandro Magro, the Executive Director of the LBC, the Chairman of the Economic Committee of the LBC, and the heads of the Eastern and Southern branches of the LBC.

Fellah praised the depth of relations between the two neighbouring countries and the importance of economic cooperation between them and the role of the private sector in reviving this cooperation. He stressed the need to work together to encourage investment and facilitate the movement of business owners to and from Malta.

The head of the LBC’s eastern branch also welcomed the guest and touched on the projects that its branch is working on, and invited the ambassador to visit Benghazi, proposing to him to open a consulate there.

Promising investment opportunities in the south

The head of the council’s branch in the south also spoke about the promising investment opportunities in the south, whether in the fields of industry or agriculture, and the importance of the Maltese party’s participation in these areas.

The Chairman of the LBC’s Economic Committee presented a summary on the Libya Reconstruction Project blueprint, which has been submitted through the LBC to the Libyan government, and the steps that have been taken to study this project and how to implement it through the Libyan private sector.

The LBC ‘s Executive Director explained the Almenasa digital business platform, how investors can benefit from it, the services that they can obtain through it, and its role in the partnership between the public and private sectors.

Several understandings and agreements were reached

The attendees discussed all economic issues of interest to both parties, and several understandings and agreements were reached, including:

The LBC said what was accomplished during the meeting comes in the context of enhancing confidence between the two parties and adopting practical ways to stimulate the economic movement between the two countries.

It also comes within the LBC’s activities aimed at activating cooperation between the LBC and its counterparts in friendly countries and working to provide facilities to the Libyan private sector for trade exchange, attracting investments and contributing to enhancing economic stability.

The LBC also announced that ‘‘within days’’, it will begin providing visa services through the Maltese embassy to its affiliated members and coordinating the formation of the commercial delegation to visit Malta.

Medavia confirms resumption of flights between Libya and Malta | (libyaherald.com)

Medavia suspends flights to Mitiga after airstrikes at airport | (libyaherald.com)

TunisAir Express to resume flights between Djerba and Tripoli | (libyaherald.com)

Cairo flights to Tripoli, Benghazi and Misrata to resume on 30 September | (libyaherald.com)