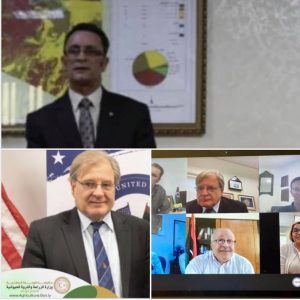 Libya’s Ministry of Agriculture and Livestock reported yesterday that its Minister, Hamad Al-Marimi, held a first-ever virtual meeting with the U.S. Embassy Wednesday on cooperation in the sector.

The meeting included U.S. Ambassador to Libya Richard Norland, the Political and Economic Attaché, and the Agricultural Attaché. It also included the Director of the Libyan American Chamber of Commerce (AmCham) Debbie Hirst and Deputy Ahmed Al-Ghazali.

At the meeting, Minister Al-Marimi discussed the Libyan government’s directives and keenness to build bridges of cooperation between the two countries beneficial to achieving its goals of food security in accordance with health specifications and standards.

He also discussed encouraging cooperation at the private sector level between Libyan and American agricultural companies, to participate in promising investment programmes in this vital and important field. This included exploiting and leveraging Libya’s vast land expanse of fertile soil and good water supplies.

The Minister also discussed leveraging Libya’s geographical location as a link between the south and the north, as a point of convergence between the Sahara and the post-Mediterranean region.

The meeting also touched upon a number of other important points, including:

The Minister also thanked the Ambassador for his kind invitation to attend the international livestock conference, scheduled to be held in the UAE this November under the supervision of the Attaché for American Agricultural Affairs.

At the conclusion of the meeting, the attendees stressed that this meeting constitutes a nucleus for upcoming meetings and a boost to joint cooperation in the field of agricultural cooperation between the two countries.