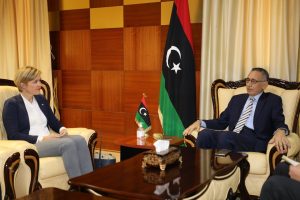 Britain is ready to support Libya in all economic and trade sectors, including renewable energies, British Ambassador to Libya Caroline Hurndall was quoted as saying by Libya’s Ministry of Economy and Trade last week.

The statement came during the meeting of Libya’s Minister of Economy and Trade, Mohamed Al-Hwej with Ambassador Hurndall last Wednesday at the Ministry’s headquarters.

The meeting touched upon several files related to the fields of economy and trade and ways to enhance cooperation between the two countries in the fields of investment and the economic and financial reforms programme.

The Minister stressed the keenness of the Government of National Unity to establish a real partnership with the United Kingdom in a number of areas of common interest and cooperation in the health, transportation and development sectors with the aim of developing and improving services and raising the standard of living for citizens. He added that the Ministry is working on a programme of economic reforms aimed at improving the business environment in the Libyan market and creating real investment opportunities and put them forward for partnership with the local and foreign private sector.

Cooperation with advisory institutions and specialized expertise in the UK

The Minister also noted that the Government of National Unity is working to support the business sector, investment and implementation of renewable energy projects with the aim of enhancing its role in raising the level of GDP for the non-oil sectors. The Libyan government, he added, is looking forward to raising the level of cooperation with advisory institutions and specialized expertise in the United Kingdom in this field.

The Minister of Economy and Trade called on the British side to organize a joint economic forum that includes economic institutions and activities under the auspices of the Ministers of Economy and Trade in both countries, with the aim of exchanging experiences, discussing promising cooperation opportunities in the fields of investment, implementing and activating free and industrial zones, and organizing joint international exhibitions.

For her part, the British Ambassador confirmed that she is closely following developments in the State of Libya, especially in the fields of economy and trade, and expressed her country’s readiness to provide the necessary support to the State of Libya in all sectors, as well as contributing to the implementation of renewable energy projects that have become an alternative to oil in many industries.

At the end of the meeting, the two sides stressed the importance of continuous communication and to raise the level of cooperation and to start taking the necessary measures and arrangements to hold a joint economic forum that includes chambers of commerce, investors and those interested.