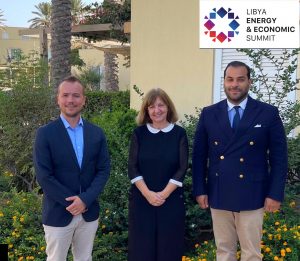 France will support the Libya Energy and Economic Summit with high level participation, organizers Energy Capital & Power (ECP) report. The event will take place on 22-23 November this year in -person in Tripoli and on Zoom for online participants.

Organizer ECP report that they have invited regional partners from Europe, the UK, the U.S., Turkey, Egypt and others to join.

France’s support was revealed by James Chester, Senior Director of ECP, and local partner Ahmed Al-Ghazali, after their meeting yesterday with French Ambassador Beatrice du Hellen where they report she welcomed, and affirmed the support of the State of France for the conference.