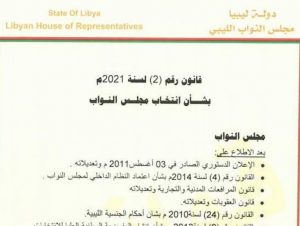 Voting is conducted (Article 18) on individuals on a non-transferable basis as opposed to independents, parties or list system (Article 21).

No dual nationality for candidates

Article 6 (9) prescribes that candidates must not hold another nationality unless permitted by the Libyan state top do so.

The law (Article 18) also prescribes that that 16 percent of seats in parliament are reserved for women.

Parliamentary elections to be held 30 days after presidential elections

The new law also prescribes that parliamentary elections are to be held 30 days (23 January 2022) after the presidential elections are held on 24 December 2021 (Article 20).

State to provide security and guarantee right to vote

Article 42 prescribes that the government must provide security and guarantee the right to vote to voters during the election.

The next parliament to review constituencies

Libya’s election law for the head of state was ”passed” by the HoR on 9 September.

No one should have veto over electoral legislation – voters should be trusted by Libyan political elite: U.S. Ambassador Norland | (libyaherald.com)

HoR to hold session ‘‘to complete’’ budget law, election law, electoral districts, and the position of head of Intelligence | (libyaherald.com)

Over 51,000 new voters recorded on the electoral register | (libyaherald.com)

We must do everything to ensure potential internal and external spoilers do not derail Libyan elections: U.S. Representative to the United Nations | (libyaherald.com)

Hafter calls on Aldabaiba government to implement the Berlin Agreement in full | (libyaherald.com)