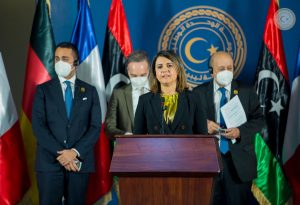 Speaking at a press conference during her visit to Kuwait on Sunday, Libya’s Foreign Minister Najla Mangoush confirmed that some foreign fighters had indeed left the country.

Mangoush’s statement gives confirmation to many unsubstantiated reports in Libya over the last two weeks that some fighters had left.

She was quoted by Reuters as saying “The reports are correct. There is a very modest start,”

“We are still seeking a larger and comprehensive organisation for the exit of mercenaries,”, she added in her brief comment.

It is unclear on what basis the foreign fighters had left and from which side. There had been reports that some Syrian mercenaries had demonstrated in Tripoli due to the lack of pay, for example.

Russia has consistently called for the synchronised withdrawal of foreign fighters in Libya.

Yesterday, UNSMIL convened in Geneva Libya’s 5+5 Joint Military Commission ”to discuss the development of a comprehensive action plan for the withdrawal of mercenaries, foreign fighters, and foreign forces from Libya.’’

In his opening remarks, Special Envoy of the UN Secretary-General and Head of UNSMIL  said “Of course, it is a complex issue, as it is not only a concern for Libya, it is also a concern to regional countries and the international community. The UN, along with its international partners, stands ready to support you in this endeavour, to the maximum extent possible, including through the deployment of UN ceasefire monitors, who will work under your guidance and at your request to monitor and verify the withdrawal. My message to you is to not let the “spoilers of hope” undermine your crucial work.”

The UN Mission encouraged the 5+5 JMC to seize this opportunity to produce the required action plan for the withdrawal of the mercenaries and foreign fighters and forces, which will also guide the international community’s support to the Libyan efforts to unify the military as well as disarmament, demobilization and reintegration (DDR) and security sector reform (SSR) efforts in Libya, with a stabilizing impact on the region.

Libya’s 5+5 JMC convenes in Geneva to discuss plan for withdrawal of mercenaries, foreign fighters, and foreign forces from Libya | (libyaherald.com)