Joint statement by France, Germany, Italy, the UK and the U.S. welcoming 5+5 JMC Action Plan for withdrawal of mercenaries and foreign fighters and forces 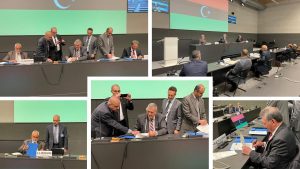 A joint statement by France, Germany, Italy, the UK and the U.S. welcomed the signing of the 5+5 JMC Action Plan for withdrawal of foreign mercenaries and forces in Geneva on Friday (Photo: UNSMIL).

In a joint statement released yesterday, the Embassies of France, Germany, Italy, the United Kingdom and the United States in Libya joined Special Envoy and Head of UNSMIL Jan Kubis in welcoming the announcement made on Friday 8th October 2021 by the 5+5 Joint Military Commission (JMC) of the signing of a comprehensive Action Plan for the withdrawal of mercenaries, foreign fighters and foreign forces from Libyan territory, in alignment with the Ceasefire Agreement of 23 October 2020, United Nations Security Council Resolutions 2570 (2021) and 2571(2021) and the outcomes of the Berlin Conferences.

The statement continued: ‘‘We recall in this regard that UNSCR 2570 called on all Libyan and foreign parties to implement the 23 October 2020 ceasefire agreement in full, including through the withdrawal of all foreign forces and mercenaries from Libya without further delay.

We applaud again the patriotism and commitment of the JMC members, encouraging them to seize this opportunity to further the full implementation of the Ceasefire Agreement. The nationally-owned and led Action Plan they adopted in Geneva can be key to restore the sovereignty, independence, territorial integrity and national unity of Libya. Again, we join the UN Special Envoy in calling on all members states to support the 5+5 JMC and on Libyan authorities to implement the Plan. We commend also the emphasis on consulting and cooperating with international concerned partners, notably neighbours of Libya, in the implementation of the Plan.

We commit to supporting the Libyan Ceasefire Monitoring Mechanism, under the leadership of the JMC and look forward to the rapid deployment of the UNSMIL ceasefire monitoring component as requested by JMC and in accordance with UNSC Resolution 2570 (2021).

We further underline the need for the disarmament, demobilisation and reintegration (DDR) of armed groups and all relevant non-state armed actors, for security sector reform (SSR) and the establishment of an inclusive, accountable, civilian-led security architecture for Libya as a whole.

We reaffirm the need to combat terrorism in Libya by all means in accordance with the UN Charter and international law and call on all parties to dissociate from UN-listed terrorist groups and individuals.

We reiterate our commitment to unequivocally and fully respect and implement the arms embargo established by UNSC Resolution 1970 (2011) and the Council’s subsequent Resolutions, and call on all international actors to do the same, as we commend the work of EU operation EUNAVFOR MED IRINI concerning the implementation of the arms embargo in accordance with its mandate.

Finally, we recall that individuals or entities engaging in, or providing support for acts that threaten the peace, stability or security of Libya or that obstruct or undermine the successful completion of its political transition, may be designated by the Committee established pursuant to paragraph 24 of resolution 1970 (2011) for the travel ban and asset freeze measures.’’