Libya on brink of another west-east split and unravelling of LPDF’s Road Map? 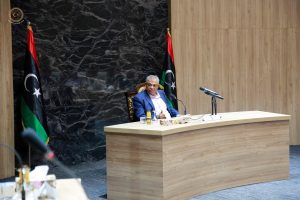 With the 24 December 2021 elections looking in the balance, Libya looked like it was heading into another west-east split and an unravelling of the November 2020 Libyan Political Dialogue Forum’s (LPDF) Roadmap yesterday.

The threat of political breakdown came in the form of a statement read out by Hussien Gatrani, Deputy Prime Minister of Libya’s Government of National Unity (GNU). Al-Gatrani, who hails from the east, was issuing the televised statement in front of a gathering of Libya’s eastern based (Barqa/Cyrenaica) Deputy Ministers, Ministers and mayors in Benghazi.

In his ten-point statement, Gatrani:

The November 2020 LPDF Roadmap is Libya’s current political roadmap – within the 2015 Skhirat Libyan Political Agreement (LPA) which is in turn within the Transitional Constitutional Declaration (TCD) of August 2011.

The LPA was the political fix after militias carried out a coup in Tripoli in 2014 in reaction to losing power after the 2014 elections. The 2011 TCD was the temporary social contract to fill the void left by the collapse of the 42-year Qaddafi regime.

The current Government of National Unity (GNU) led by Abd Alhamid Aldabaiba is the selected child of the LPDF Road Map. The original 74 LPDF members were chosen by UNSMIL to broadly represent Libya.

UNSMIL and the international community created the LPDF to get passed Libya’s political impasse and quagmire where parliament (the House of Representatives – HoR), the High State Council and the Faiez Serraj Government of National Accord (GNA) failed to achieve consensus and move forward to elections to get the country out of its ‘‘interim’’ state.

Centrifugal effect of threat of elections?

It seems that the threat of Libyan elections in December this year, or soon afterwards, is having a centrifugal effect on Libyan politics. There is a fear of change and the forthcoming political unknown by the status quo stakeholders who fear losing power or even being vulnerable to prosecution or persecution after any elections that may sweep the old political guard aside.

The implication of Gatrani’s statement is that there was a written and an unwritten agreement of a quid pro quo, that in return for Khalifa Hafter, parliament and eastern Libya, buying into the Aldabaiba GNU – the GNU would make real political concessions to the east. This included moving forward with decisions after consultation and in consensus.

Aldabaiba is accused of being on a state-sponsored election campaign and of taking decisions unilaterally. He is accused of refusing to appoint a stand-alone Defence Minister in order to consolidate his military and political hold on western Libya and indirectly on the other two regions.

Gatrani accuses Aldabaiba of increased centralization rather than Aldabaiba’s claim of decentralizing powers to the regions and local councils. This includes the effective refusal to return the National Oil Corporation (NOC) to its original site in Benghazi. Tripoli has failed to reopen the bank clearing system closed during Hafter’s war on Tripoli in order to starve eastern based banks accused of financially supporting Hafter.

The 23 October 2020 ceasefire agreement (which ended Hafter’s war on Tripoli) through which Hafter allowed the eastern-based oil supplies to flow again prescribes for the reopening of the bank clearance system. The closure of the clearance system is causing huge hardship to Libyans in the east and stunting the regions development. It is also threatening to collapse the whole Libyan banking system which is now lopsided.

Gatrani also accused Aldabaiba of playing to the western-based gallery by being divisive in some of his media statements – rather than attempting to seek a middle path to keep the opposing Libya political outlooks united.

At the end of the statement, Gatrani threatened escalatory measures by the east. The Aldabaiba government has already been downgraded to a ‘‘caretaker’’ government, but its public relations / propaganda machine seems to be going into overdrive – or election campaign mode.

Every road or clinic or building completed is now a huge PR event for the government for the next three months.

Its ironic that the political strata is falling out at just the time when the two sets of military heads have reached an historic agreement in Geneva to start organized and coordinated withdrawal of their aligned foreign militias/forces.

The room for political manoeuvre is limited for the east short of going nuclear and shutting down oil production or all-out war. There is little leverage they have on Tripoli. The government has been demoted but it falls to the Tripoli-based Central Bank of Libya and Audit Bureau to agree or stop its spending decisions.

It now falls to the international community to try to broker between the two sides to deescalate the tension. But it seems the closer Libya gets to just the idea of elections the higher the stakes and the higher the risks being taken by both sides of Libya’s political divide.