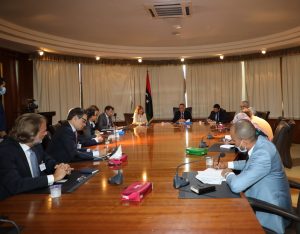 The French business delegation included companies already operating in Libya as well as companies wishing to enter the Libyan market.

The meeting, in the presence of the Undersecretary for Commercial Affairs and President of the Union of Chambers of Commerce, Industry and Agriculture, discussed ways to enhance cooperation between the two countries in areas of common interest, raise the level of trade exchange, and organize joint forums and exhibitions with the aim of creating a connection between economic activities and exchanging experiences between the two sides.

The Minister of Economy and Trade praised the efforts of France in achieving stability in the State of Libya and its support for the political, security and economic tracks. He stressed that the Government of National Unity (GNU) seeks to enhance cooperation in the fields of investment, trade, renewable energy, the reconstruction, and infrastructure development programme in all regions. It also seeks to establish of facilities in the education and health sectors and raising the level of their performance. The Minister noted that the Ministry of Economy and Trade is concerned with supporting all sectors in the country and enhancing its role in developing the national economy.

Minister Hwej also noted that Libya is committed to the concluded agreements and is working to redevelop and activate them in a way that enhances the stability that the GNU aspires to and contributes to supporting the national economy and raising the level of services, which is among its priorities.

For her part, the Economy Ministry reported that the ambassador stressed that the France seeks to develop relations with Libya and establish a long-term partnership and cooperation in the areas targeted by the Libyan government’s plan. She also expressed the desire of French companies to enter the Libyan market in the fields of investment and trade and to contribute to the development of the energy, health and education sectors.

At the conclusion of the meeting, the minister directed the formation of the Libyan-French Business Owners Council to develop a plan for a partnership between the two countries in the fields of investment and trade and contribute to raising the level of trade exchange and communication between economic actors.

The French ambassador and her delegation had also held meetings with the Oil Minister and the Union of Chambers of Commerce.