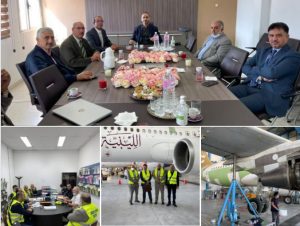 The Deputy Minister of Transport for Air Transport Affairs, Khaled Swessi, accompanied by the Director of the Financial Department at the Ministry of Transport, Omar Al-Torgoman, and the Maintenance Director of the Libyan Airlines Company, Khalifa Al-Jehani, met with the management of Airbus in Tunis yesterday.

As manufacturer, Airbus is supervisor of the maintenance of the Libyan Airlines (LN) plane 5A-LAH at the Maintenance Centre of TunisAir at Carthage International Airport.

The LN plane was hit during the militia fighting that took place at Tripoli Airport in 2014 where it had sustained damage at 92 points with live bullets and shrapnel from missiles.

The plane has been present in Tunisia since 2015.

Now the aircraft is in the final stages of maintenance after completing the maintenance of the structure and procedures for inspections and periodic checks of the engine and landing system are underway.

The Transport Ministry says the field visit is part of the follow-up and implementation of the government’s Reviving Life plan, which aims to complete the maintenance of aircraft and return them to service.