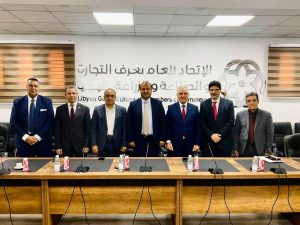 The President of the General Union of Libyan Chambers of Commerce and Industry, Mohamed Raied, received Khaled Hanafi, Secretary-General of the Union of Arab Chambers, at the headquarters of the Union in Tripoli on Sunday, in the presence of several business owners.

The Libyan General Union reported that this is the first visit by the Union of Arab Chambers to Libya for 20 years.

This visit comes within the framework of developing relations between Arab countries and preparing for the Nineteenth Conference of Arab Business Owners and Investors, which will be held in Tripoli on November 28 and 29, under the auspices of Prime Minister Abd Alhamid Aldabaiba.

More than 300 invited business leaders and officials from Arab Unions and Chambers, Arab Joint Chambers and several Islamic and international banks will attend the conference.