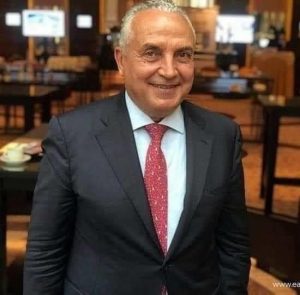 Husni Bey responded today to Prime Minister Aldabaiba’s call yesterday for the private sector and banks to do more to activate the Libyan economy (Photo: H.Bey).

Speaking at yesterday’s PPP workshop organized by the private sector lobby group, the Libyan Council for Oil and Gas and Renewable Energy (LCOGRE) Aldabaiba had warned that liberating Libya’s banking system was important to stop the outward flight of capital as many Libyans were smuggling their money abroad to invest it there.

The Prime Minister also bemoaned the fact that Libya’s banks were sitting on mountains of cash earning pitiful returns which ordinarily should be powering investment in the economy through various types of finance products. This money is being wasted he had said.

Aldabaiba had said he will be announcing a LD 12-13 bn initiative for loans through leasing (the government had in fact already announced this earlier). Through leasing, banks will continue to own equipment/machinery purchased by their clients until fully paid for, he explained. The state will act as the guarantor for these loans, he confirmed.

Responding (exclusively to Libya Herald) today, leading Libyan businessman Husni Bey said, ‘‘banks in general own no money other than their capital and reserves. The bank balances are owned by the public and the banks’ role is limited to managing these deposits. Banks must take all due care and diligence to protect depositors’ money. Banks to grant credit lines need collateral represented mainly in fixed assets, liquid and verifiable assets such as stock market values.

In libya we miss all these credit vehicles.’’

CBL does not encourage culture of lending

Bey went on to state that Central Bank of Libya (CBL) circulars and instructions ‘‘go against granting credit to the economic sector. Worse yet, is that 75 percent of GDP is produced by three state entities: the National Oil Corporation (NOC), the General Electricity Company of Libya (GECOL) and Brega Marketing Company. These three companies are allocated government budgets and have no profit and loss accounts, nor do they have measurement tools to access efficiency and profitability.”

”No Financial institution nor bank nor venture capital nor General investor will grant one Libyan Dinar to these companies because they lack measurement tools for profitability ( P&L and Cash Flow ) A further 10 percent of GDP is generated by government-owned loss-making companies (except the monopoly telecoms holding company).’’

The King of all collateral

Building on his concept that no responsible bank can offer loan or credit facilities without some kind of guarantee that their depositors’ money is secured, Bey pointed out that the ultimate ‘‘king of all collaterals’’, Libya’s land registry, has been closed since the 2011 revolution. With this in mind, Bey was perplexed by the Prime Minister’s statements and calls for Libya’s banks to lend more to the private sector.

In his view, activating the Libyan economy starts with the right legal and legislative environment and banking practice.

Another impediment to Libyan banks’ ability to provide finance to drive Libya’s economy Bey says is the continued closure of the bank clearing system between eastern Libya and the rest of the country.

However, the 23 October 2020 Ceasefire Agreement that ended Libya’s political split and led to the creation of the current Government of National Unity (GNU) prescribed that in return for normalization and the resumption of oil production from the eastern oilfields, western Libya would reopen the bank clearing system.

This has still not happened, and it is not only severely stunting economic growth, but it is also threatening to collapse Libya’s banking system. The rest of Libya can neither receive from nor transfer money to eastern-based Libyan banks. This has led to money having to often be transferred physically from west to east and vice versa. It has forced the increased use of cash and reinforced the concept of hoarding cash outside the banking system. It is re-entrenching the cash economy at the very time the state is trying to digitize and encourage the culture of e-payments, e-commerce and an e-economy.

The message from Bey is that the government has to set the foundations for economic growth and development by first creating the right environment for the private sector to flourish.

In summary, Bey said the government must: