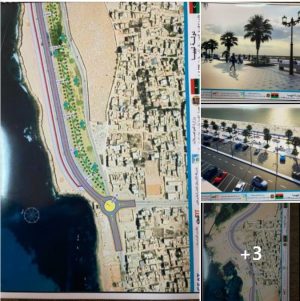 The Municipality of Hay Al-Andalous announced last Saturday the start of construction on its seafront road project. The road will start from the Sheraton/Four Points and will be implemented jointly between the Public Works Company and a Tunisian company.

The project is awaiting the transfer of an electricity substation by the General Electricity Company of Libya (GECOL) which is currently blocking the route.

The seafront road will feature a pedestrian footpath along the sea creating a nice corniche.

Sewage flow into the sea

The Municipality also announced that the project to process the sewage water that currently flows into the sea adjacent to the hotel complex will also start. Ground clearing by diggers has already commenced, visible to drivers into Girgarish from the Sug Il-Thlat roundabout.

The Municipality said the launch of the projects are part of the governments Reviving Life policy of restarting as many projects as possible to kickstart the Libyan economy.