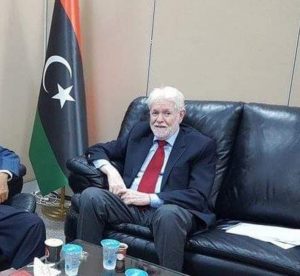 Abdalla Fellah, LBC head, has responded to PM Aldabaiba’s call for the private sector to do more by calling on the government to implement certain measures  (Photo: LBC).

Abdalla Fellah, the head of the Libyan Business Council (LBC), the only officially recognized business council with branches in the east and south of Libya, responded yesterday to the call on Monday by Prime Minister Abd Alhamid Aldabaiba for the private sector to do more to activate the economy.

Speaking exclusively to Libya Herald in Tripoli yesterday, Fellah welcomed the positive stance taken by Aldabaiba towards the role of the private sector in activating the economy.

‘‘Partnership between the public and the private sector is the right way to develop the Libyan economy. We appreciate the Prime Minister’s invitation to the private sector to put forward implementable recommendations to improve the economy as well as to liberate the banking sector.

Liberating the banking sector will undoubtedly play an effective role in financing economic activity, increasing production and providing job opportunities, which will achieve economic stability and reduce the severity of economic fluctuations arising due to the global economic crisis.’’

However, Fellah called on the government to ‘‘expedite the implementation of the contents of his speech by taking decisions and measures that would:

Firstly, facilitate the means of partnership between the public and private sectors.

Secondly, provide an opportunity for the business sector in Libya to put forward its ideas and proposals for the advancement of the economy and the initiative to contribute to various development projects, in various sectors and to take a positive role in the development of the national economy.

Thirdly, the development of the banking and finance system, all of which would reflect positively on the economic situation and the accompanying steady growth and improvement in people’s lives.’’