The Libyan Ministry of Labour and Rehabilitation launched its National Project for the Rehabilitation and Reintegration (of militias) at a lavish event in Tripoli’s Mahary Radisson Blue Hotel this morning. The event was attended by a plethora of Ministers and the Central Bank Governor and headed by the (very late arriving) Prime Minister Abd Alhamid Aldabaiba.

The project, under the slogan “With rehabilitation and work, we contribute to the return of life,” is a continuation of several other projects launched since the end of the 17 February 2011 revolution that toppled the Qaddafi regime attempting to disarm, demobilize, and reintegration (DDR) Libya’s militias. 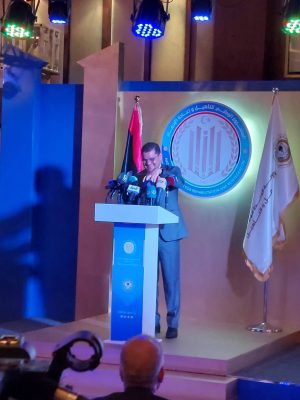 In his speech, Aldabaiba called on the youth to move towards construction and reconstruction, to renounce the slogans of war and destruction, and to work towards achieving a stable present and build a better future for our children and grandchildren, because the country deserves support towards stability, security and peace.

He stressed that his government is in the midst of providing the best youth programmes in light of its quest to achieve a prosperous future for all segments of society.

He also indicated his determination to take the hand of all the young people in all of Libya, who he considers as a national asset that must be preserved, and to integrate them by providing professional and employment programmes that guarantee them a decent life, and keep them away from the spectre of engaging in wars and make them individuals capable of integration and work and provide what they have of capabilities to participate in nation-building.

He explained that the time plan that we are working on under the supervision of the Ministry of Labour and Rehabilitation aims to raise the capabilities of all elements wishing to integrate and work to attract everyone and provide opportunities to raise efficiency and scientific and technical development by providing all scientific, technical and electronic courses.

Aldabaiba also addressed the youth, saying, “You have increased this country and the pillar of its progress, and you are our hope for a bright future with your constructive presence, because you are participating in the reconstruction and development, and we, after God Almighty, depend on you because you are the builders of this future, and we are proud of you while we are among you today.”

The DDR of Libya’s militias: From WAC to LPRD

It will be recalled that previously the DDR of Libya’s militias was under the Warriors Affairs Commission (WAC) in 2012 which was rebranded as the Libyan Programme for Reintegration and Development (LPRD) in March 2014.

Under whatever brand, it has failed to conduct nationwide reintegration of Libya’s militias and critics would argue that it is the militias that have succeeded in integrating the Libyan state into their ranks by infiltrating and controlling it.

Ministry of Interior decrees to categorize and DDR militias | (libyaherald.com)

Government climbs down over LPRD board firings | (libyaherald.com)

LD 500 million project being prepared by Warriors Affairs Commission to get revolutionaries ready for business | (libyaherald.com)