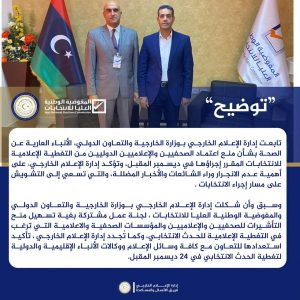 The Foreign Media Department (FMD) of the Libya’s Ministry of Foreign Affairs and International Cooperation said yesterday that it had followed up on what it referred to as ‘‘the baseless news about preventing the accreditation of international journalists and media professionals from media coverage of the elections’’ scheduled for December 2021.

It stressed the importance of not being drawn into what it labelled ‘‘rumours and misleading news, which seek to disrupt the course of the elections’’.

The FMD said that it and the High National Elections Commission (HNEC) had previously formed a joint working committee in order to facilitate the granting of visas to journalists, media professionals, and press and media institutions that wish to cover the electoral event.

The FMD also reiterated its readiness to cooperate with all media and regional and international news agencies ‘‘in accordance with the laws regulating the Libyan state’’ to cover the electoral event on 24 December.

The statement by the FMD comes on the back of fears by local and international media that they will not be granted easy, international-standard, access to cover Libya’s planned elections.

The problem is, as the FMD statement unwittingly said, it will act ‘‘in accordance with the laws regulating the Libyan state’’.

The problem is that Libya is an interim/transitional state, still operating under Qaddafi era and Qaddafi mentality laws. This, despite the fact that the 2011 Transitional Constitutional Declaration (TCD) enshrines free media. Sadly, the practice by the Libyan state and the Qaddafi era laws still operable are totally from the pre-2011 era.

Libya Herald has already witnessed difficulty for local media covering several events attended by Ministers and especially by Prime Minister Abd Alhamid Aldabaiba. This has nothing to do with the FMD and is the concern of local security. The FMD is only concerned with accreditation and visa invitations for foreign media.

Nevertheless, Libya Herald noticed that there is still a culture of fear if not a phobia of free media – a legacy of the Qaddafi era. Media is not treated with respect and is seen as secondary and not important. It is not treated with the respect it deserves – unless it is biased media in favour of the government/state.

The excuse used is usually security. For example, Libya Herald witnessed multilayers of, and personnel from, different agencies preventing media from entering the VIP hall at the recent Taqnya 2021 ICT event. Some media entered only after intervention by personal contacts (wasta).

Aldabaiba government has its media favourites?

Libya Herald has received accusations from locally operating media that those around Aldabaiba will only allow their favourite media outlets into some events. Some say certain channels politically aligned to Aldabaiba or his communications guru, Al-Lafi, receive preferential treatment.

Other foreign media complained of excessive bureaucracy in receiving approval to travel outside Tripoli to film or cover events.

Media are scarred to openly complain through the media or to the government in case they are harassed or prevented from working. Ultimately, they fear official arrest or even illegal detention.

Worrying in view of elections

Either way, these reports are worrying in view of the planned elections. There can be no democracy or free, fair, transparent elections if there is no free media and coverage. Only with constructively critical and investigative media can politicians be held to account to ensure good governance. Otherwise the elections will be a sham.