Hafter announces he is running in Libya’s presidential elections 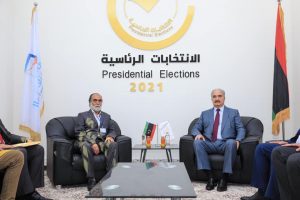 Khalifa Hafter announced today that he is running in Libya’s presidential elections planned to start on 24 December 2021.

In a speech announcing his candidacy, Haftar said that Libya stands at the crossroads of two irreversible paths, the path of freedom, stability, peace and progress, and the path of tension, conflict, and absurdity.

Speaking to reporters at the headquarters of the High National Elections Commission (HNEC) office in Benghazi, this morning after submitting his candidacy papers for the presidential elections, he called on Libyans to make the right choice in the upcoming presidential elections, which they would not regret again, warning of the difficulty of the next stage.

Hafter expressed his happiness with the start of the candidacy procedures and the launch of the presidential elections. He praised HNEC and its staff for the excellent organization and arrangement of the electoral process.

Haftar warned that the next stage is a difficult stage and requires only a man. He called on all Libyans to make the right choice that they will not regret again. He considered holding the elections on their scheduled date on 24 December the only way out of the crisis in Libya, and the best way for the country to return to its normal position among nations.

Yesterday, Saif Al-Islam Qaddafi, son of former dictator Muamar Qaddafi registered in Sebha to run at the presidential elections. Other candidates have also announced they will be running.