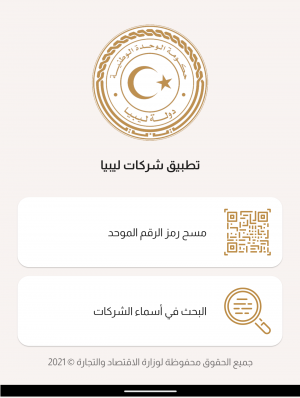 The Ministry of Economy is to launch its companies registration app ”Libya Companies” to help efficiency and fight corruption (Photo: Documentation Dept of Economy Ministry).

Libya’s Ministry of Economy and Trade is preparing to launch its new ‘‘Libya Companies’’ application (App). The Ministry’s Centre for Information and Economic Documentation, the app’s implementing arm, reported that it has completed the preparation of the first version of the app.

The development of the app is part of the Economy Ministry’s efforts to introduce digitalisation and a unified electronic services platform (The Minister of Economy and Trade decision No. (61) of 2021)

The move would introduce effectiveness and efficiency in company registration such as in the search for company names. It will also reduce corruption by helping exclude fictitious companies from commercial activity.

The Ministry reported that the first version of the app (which will be followed by other updates) will allow banks and other users such as the customs and tax departments to:

It will allow citizens to check whether their national numbers have been registered as shareholders or in the management of companies.

The app will also allow the receipt of various notifications from the system.

The developments planned for later versions will include notices alerting the user to renew their business record and membership in the Chambers of Commerce and Industry and other information and notices that will reduce administrative red tape for businesses.