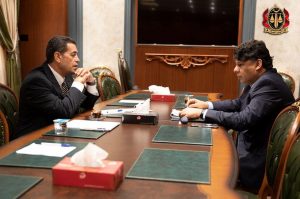 Emad Sayeh, the head of Libya’s High National Elections Commission (HNEC), visited Sideeg Al-Sour, the Attorney General, at his Tripoli headquarters on Wednesday as part of HNEC’s procedure of weeding out election candidates that do not meet the prescribed elections rules’ criteria.

Specifically, the Attorney General’s Office reported that the meeting dealt with a review of HNEC’s efforts aimed at verifying that presidential and parliamentary election candidates meet the conditions stipulated in the legislation regulating the electoral process, and in particular, HNEC’s assurance that ‘‘no judicial ruling has been issued with a penalty stipulated in the articles of felonies or misdemeanours that violate honour facing the candidates from the records of the Public Prosecution Office.’’

Analysis: Will Saif Al-Islam Qaddafi quality to run at the elections?

It will be recalled that the announcement on 14 October by Saif Al-Islam Al-Qaddafi, son of deposed dictator Muamar Qaddafi, that he has presented his papers to HNEC to run in Libya’s presidential elections caused much consternation in Libya with the anti-Qaddafi stream.

There has been debate regarding other candidates too, including the other controversial figures such as Khalifa Hafter. However, traditional and social media engaged in much more discussion as to whether Saif could and should be allowed to stand in the 24 December elections. This was especially so with regards to the fact that Saif is still wanted for questioning by the International Criminal Court.

Photographs and videos of Saif pointing his finger and threatening Libyans at the height of the 2011 17 February revolution have also been prominent. Libyans were reminded that Saif chose his father and his regime’s dictatorship above the Libyan people and democracy. 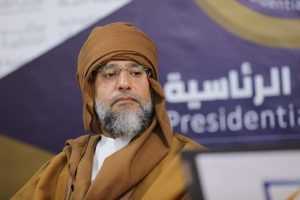 There has been much soul searching by Libyans including the point that after uprising against Saif’s father Muamar Qaddafi – only for Saif and his cronies to be allowed back to power through the ballot box.

But equally, there has been public pressure on Emad Sayeh and his HNEC to bar Saif from running. Sayeh’s publicised meeting with the Attorney General is as much a message to the public as part of procedures. Sayeh seeks legal ground upon which to allow or bar Saif – and any other candidate – from running at the next elections. He is attempting to inform Libyans that his decision will be apolitical, and that they should accept it as that.

The Libyan public await this decision with bated breath. It could have a big effect on the election. It could unite Saif’s opposition, or it could tear Libya apart if Saif makes progress. True Libyan democrats say he should be allowed to run and it is up to the Libyan people to defeat him through the ballot box.

However, those who suffered immensely from the Qaddafi regime and from the 2011 17 February war against the regime find it unacceptable that Saif could be allowed to run. They say Saif stood by and encouraged his father’s repression of the Libyan people. They say he and his father did their best for 42 years to avoid democracy. For this, they say Saif should be held accountable for that – not rewarded by a candidacy in Libya’s next democratic elections.