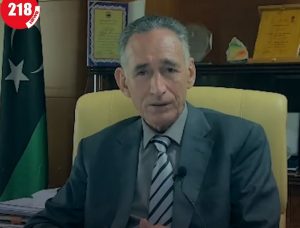 Minister of Economy and Trade Mohamed Hwej has had to conduct an embarrassing U-turn on his price-setting decision (Photo: Archives from 218 TV).

The Minister of Economy and Trade, Mhamed Hwej, cancelled his previous decision regarding setting the prices of some commodities, including bread flour, sugar, rice and canned tomatoes.

The new decision (No. 652 of 2021) stipulates that the Internal Trade Department at the Ministry of Economy and Trade will prepare a weekly bulletin that includes monitoring and following up on the prices of imported goods in the local market.

The big embarrassing U-turn came after much criticism from business, including by the head of the Libyan Business Council (LBC) Abdalla Fellah speaking exclusively in this publication.

Fellah had accused the government of ‘‘hiding its miscomprehensions of international and local economics and hiding its inefficiency and ineffectiveness.’’

He said it was following short-term, knee-jerk policies and of being reactive rather than proactive in its policy stance. He had pointed out that even the Union of Consumers has already rejected the government’s policy moves as retrospective.

Going back to Qaddafi-era cooperatives won’t bring down prices

The LBC head noted how there have been populist calls in the media for the return of the Qaddafi-era subsidised food cooperatives. He said this is the ultimate proof that the average person in the street does not understand the causes of price rises. He pointed out that even if cooperatives were to reopen, prices will be high because they reflect international price rises.

They forgot to mention the dinar devaluation!

Fellah had said the government fails to point out that prices have shot up partly because the official Libyan dinar exchange rate has been adjusted about fourfold. The LD used to at around 1.4 per dollar, now its LD 4.45 per dollar. This has been inputted into all imported food prices. The high prices have nothing to do with profiteering businesses – its imported price rises, he had explained.

Its retrospective going back to Qaddafi-era practices – the future is the private sector!

The head of the LBC was saddened that there are those in government who still see the Qaddafi-era economics as a viable option. He said the future of Libya is the private sector through a free market and open competition.

He said central state-controlled economics had been practiced for decades by the previous regime and it had failed miserably. Libya should be looking forward and implementing radical policies -not going back to tried and failed policies.

In an effort to bring prices down, Libya exempts food imports from all duties | (libyaherald.com)