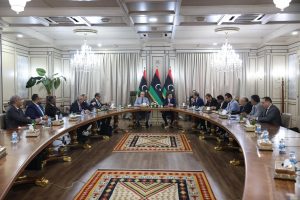 In the presence of the Central Bank of Libya Governor, several government ministers and heads of executive bodies at the Cabinet Office in Tripoli, direct links with the sites of a number of projects were established in order to communicate live with project supervisors and engineers.

The head of the Housing and Infrastructure Board (HIB) made a technical presentation, during which he explained the HIB’s work progress in projects, which amount to 262 projects across Libya and in which the completion rates have reached high rates.

The head of the Organization for Development of Administrative Centres (ODAC) also made another presentation highlighting the most important projects that it has started to implement, which include several health facilities and schools totalling 273 projects.

The head of transportation projects, in turn, presented the 197 projects that work has been started on.

The Prime Minister stressed the importance of completing these projects and maintaining geographical diversity, stressing that the financial allocations have been allocated in accordance with the state’s financial law. He said his government launched the Reviving Life drive to restore development to the country and allocated billions for these projects.

Taking a dig at the House of Representatives for accusing him of spending money the government does not have, he said whoever considers spending these funds a waste is talking irresponsibly and is absolutely not patriotic.