Era of centralized, state-controlled economy in Libya is over: Government official 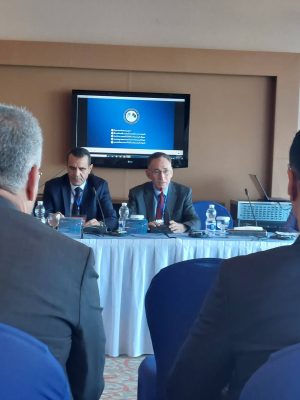 Jamal Lamushi, the head of Libya’s Privatization and Investment Board (PIB) said the era of centralized control of the economy by the state is over in Libya.

He said Libya has all the fundamentals for investment, including its strategic geographic location to sub-Saharan Africa – which he considered the next global growth area.

Lamushi also reiterated that Libya has much growth ahead of it as it included development across all sectors. ‘‘We still need everything’’.

The head of the PIB also highlighted the strategic importance and dynamics of Libya’s demographics, with 50 to 60 percent of its population classified as youth. All these need to get jobs, get married, buy homes, furnish those homes with beds, fridges, ovens, air conditions etc etc.

Housing is very important, he stressed, highlighting the fact that under the Qaddafi era the sector was ignored for decades. He said there were plans for major new smart, modern cities outside the main current urban areas. This was a definite area of future growth, he implied.

Another area Lamushi highlighted to his audience of potential foreign investors was the education sector and universities. He said Libya needed to sign agreements with American universities to help with its digital transformation.

The coronavirus highlighted weaknesses and needs

The head of the PIB said the Coronavirus pandemic and initial shortage of its vaccines highlighted the need to prioritise food security and medicine security.

Renewables are an obvious sector

Lamushi concluded his opening presentation before opening it up to detailed Q and A by saying that Libya intends to invest in the renewable energy sector, which he spent little time on as he considers it an obvious sector for development.