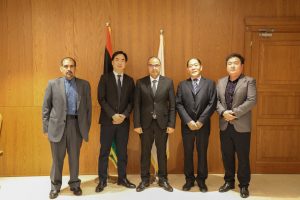 The chairman of the Steering Council of the Municipality of Benghazi, Sager Bujwari hosted a delegation at his headquarters from the China Construction Company Limited (CCCC) yesterday.

The CCCC delegation was headed by the Deputy General Manager of the company, Fo Zhenyi, in the presence of the local partner and the company’s General Coordinator in Libya, Nabil Al-Tarabaki.

Benghazi Municipality reported that the meeting discussed ways for the company to return to work in Benghazi and work on the completion of many suspended projects and the possibility of working on the implementation of new projects in the various areas of infrastructure.

It also reported that the Chinese delegation praised the level of security in the city of Benghazi and expressed its readiness to set up a joint mechanism through which the actual start of implementing works and projects during the coming period can operate.

Bujwari also stressed the municipality’s keenness to cooperate fully in order to re-establish many projects in the areas of public housing and infrastructure.