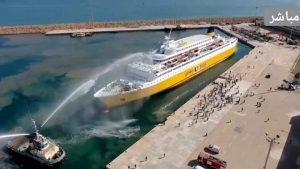 The passenger ferry Kevalay Queen will set off on its inaugural trip to Izmir next Wednesday (Photo: Misrata TV).

Misrata Maritime Terminal announced last week the launch of its inaugural passenger cruise from Misrata to the Turkish port of Izmir on the KEVALAY QUEEN.

The trip will depart next Wednesday 1 December with prices starting from 510 (just over US$ 100) dinars for a round trip per person.

It will be recalled that the Kevalay Queen docked at the Misrata Maritime Terminal on 16 November.