Op-Ed: An effective democratic transition cannot be implemented in Libya until the basic security and human rights of its people are guaranteed 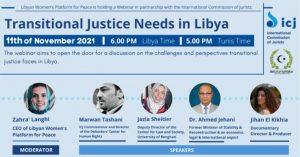 Al Barassi’s murder follows a terrorizing pattern in recent years of violent attacks against women activists who are vocal in their criticism of the authorities and affiliated militias. Her killing was an act that underlined the declining security of women who fight bravely to carve out a role in the political sphere of their nation.

It was an act that has reinforced the climate of impunity for violence against women who dared to speak out. A year has passed since her assassination and an independent, impartial and effective investigation has yet to be conducted into the killing to bring those responsible to justice.

So far, no one has been held accountable. No justice for Hanan and the many, many other silenced women.

The first anniversary of Hanan Al-Barassi’s assassination coincided with the Webinar held by Libyan Women’s Platform for Peace (LWPP) and the International Commission for Jurists (ICJ) on “Transitional Justice Needs in Libya” discussing the legal, political, social and cultural security challenges it faces in Libya today.

Speakers included: Marwan Tashani – ICJ Commissioner, human rights expert and researcher; Jazia Sheitier – Deputy Director of the Center for Law and Society at the University of Benghazi; Dr. Ahmed Jehani – Former Minister of Stability and Reconstruction and an economic, legal and international expert.

Also, making a heartfelt testimony to conclude the Webinar was Jihan El Kikhia, a family victim of forcible disappearance and daughter of leading opposition leader, Mansur Rashid El Kikhia. Kikhia was the former foreign minister of Libya, ambassador to the United Nations, and a human rights lawyer. He led opposition against Qaddafi’s regime and protested against the policies of summary executions practiced by the Libyan government at the time through the so-called revolutionary committees. Kikhia stood up for his principles and defended prisoners’ rights despite the risk.

Following his abduction in 1993, Jihan and her family were left stranded, forced to face the complexities of international politics whilst clouded by the uncertainty and confusion that their father’s absence imposed. For 19 years, they were torn between the conflicting narratives over his disappearance, who was responsible and whether he remained alive or not. Only in 2012 was his body discovered in a refrigerator in Tripoli, Libya.

Today, his abduction and death still remain a mystery, this case however, has and will continue to be marked as an international and Libyan failure to restore justice and security. It will serve as a reminder of the corrupt states that continue to practice unlawful and violent crimes to silence opposition, states that have proven again and again just how ineffectual and destructive they truly are.

Mansur Rashid El Kikhia will continue to be remembered and honoured as an organic intellectual who fought tirelessly and dedicated his life to restore peace and justice in the country that he loved so profoundly: Libya.

It has become evident through the vicious, never-ending cycle of impunity for crimes in Libya that while reconciliation may be an element of transitional justice, it can never override the need for accountability, truth and reparations for gross human rights violations. In fact, time has demonstrated that neglecting the need for justice in the interest of “peace” has compromised both justice and peace, allowing this cycle to continue endangering the Libyan nation’s security.

Indisputably, an effective democratic transition cannot be implemented in Libya until the basic security and human rights of its people are guaranteed.

Shuodoud Dajani is an intern at the Libyan Women’s Platform for Peace and student of International Law at the University of Groningen.

Conclusions of Paris Conference on Libya