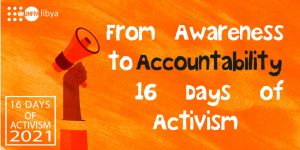 GIZ Libya reported yesterday that as gender-based violence is also a daily reality for many women and girls in Libya, last week, the hotline received 501 calls and supported 33 individuals to receive further specialized services.

The initiative is part of the UN’s global theme for this year’s ”16 Days of Activism” against Gender-Based Violence which will run from 25 November to 10 December.

In addition to physical violence, women and girls often suffer exclusion from their communities or social groups. Often, social norms as well as institutions, laws and beliefs of dominance and power cause and reinforce gender-based violence. Additional social and personal anxiety, stress, economic pressure and social isolation caused by the Covid-19 pandemic have led to a massive increase in violence against women and girls, GIZ explained.