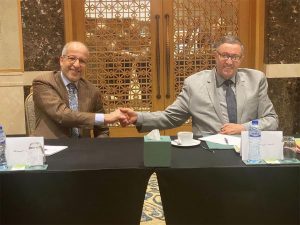 The Central Bank of Libya (CBL) announced today that its Governor, Seddek El-Kaber, and Deputy Governor, Ali Hibri (and former Governor of the former splintered eastern CBL), had met today.

The CBL reported that the stages of consolidation were discussed according to the roadmap proposed by Deloitte in its financial review process of the CBL last July, where the work tracks and technical teams involved in the implementation of the consolidation process were agreed upon.

The CBL reported that the meeting, in which Deloitte participated, after being invited to provide technical advice and support, concluded with the agreement of the Governor and the Deputy Governor to actually launch the unification process, stressing their commitment to continuing progress to achieve the desired goals of unifying the CBL.