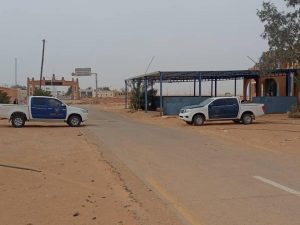 The imminent reopening of the Libyan Algerian Ghadames-Debdeb border crossing has been announced several times over the last months (Photo: Customs Authority).

The Algerian Minister of Trade, Kamel Rezig, announced the reopening of the Debdeb-Ghadames land border crossing ‘‘within a few days’’ for commercial traffic.

According to Libya’s official state news agency, LANA, in a press statement in Algeria yesterday, Rezig called on Algerian businesses to enter the Libyan market through the required food products and building materials, stressing the important role that the crossing will play in raising the volume of Algerian exports in the Libyan markets.

It is not the first time that there has been an announcement of the imminent reopening of the crossing.

It will be recalled, for example, that Libya’s Minister of Interior, Khaled Mazen, and his Algerian counterpart, Kamel Beldjoud, agreed last November to open the border crossing and to organize training courses in the field of police and civil protection.

Re-opening of Libya-Algeria Ghadames-Debdeb boder crossing could increase Algerian exports to Libya to US$ 20 billion | (libyaherald.com)