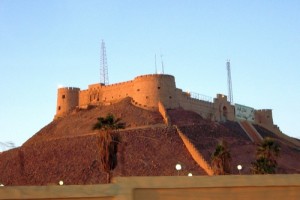 The fort at Sebha, capital of Fezzan.

Clashes broke out in the early hours of today in Sebha between government and pro Khalifa Hafter forces. Reports from Sebha say some schools and government departments have closed today and the city centre is deserted from traffic. Some roads are closed off by the clashing forces with banks of soil.

The clashes seem to have been sparked by the reported seizure by pro Hafter forces yesterday of 11 vehicles donated by the Tripoli government to the Sebha Security Directorate to support in election security.

The act of seizure could simply be a local act of the desire for new four-wheel drive vehicles. They are very much in demand by security forces and are seen as a status symbol. Nevertheless, their coercive confiscation ten days before the planned elections have political ramifications.

Test of the October ceasefire?

The clashes are a major test of the 23 October 2020 ceasefire agreed to by the two opposing political and military forces in the rest of Libya, namely across the Sirte-Jufra line.

A premeditated act to destabilise the elections?

It is unclear whether the seizure of the vehicles was a locally executed unpremeditated act or was ordered by Hafter as a power play ahead of the planned (and now very unlikely) 24 December presidential elections.

Tripoli has no control in the south?

The move could also be another loud and clear message by Hafter and/or his allies that Tripoli still has no control in the south of Libya. The implication is that whatever the election results bring in the south, control on the ground in the south is beyond Tripoli.

Can the Tripoli government secure free and fair elections in the east and south?

The incident questions Tripoli’s ability to secure free and fair elections across the country, especially in the east and south where pro Hafter forces have control on the ground.