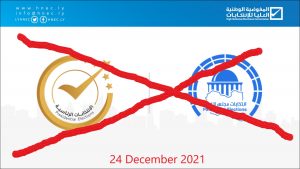 After weeks if not months of passing the buck, Libya’s High National Elections Commission (HNEC) has announced today that it ‘‘proposes’’ that Libya’s parliament (the House of Representatives – HoR) postpones the countries planned 24 December 2021 elections until next year.

In effect, it is announcing two days away from the election date that the elections are not going to go ahead. HNEC is proposing the 24 January 2022 as the new date.

In its announcement today, HNEC blamed the appeals process for the postponement of the elections. It said ‘‘The stage of (the appeals) constituted a dangerous turning point in the course of the electoral process, and it was the stop at which everyone’s efforts to achieve this historic and responsible entitlement (the elections) were due to considerations that were not within the reach of those in charge of it (HNEC).

HNEC said the most prominent of the reasons for the delay were ‘‘The inadequacy of electoral legislation with regard to the judiciary’s role in electoral appeals and disputes, which negatively affected the right of HNEC to defend its decisions, and created a state of uncertainty that the HNEC’s decisions were right with regard to its exclusion of a number of candidates who did not meet the conditions.’’

It said that ‘‘the overlap existing between the political reality and the issued judicial rulings pushed the decision to announce the final list of the candidates to what is known as the case of ‘‘force majeure’’, which led to HNEC’s inability to announce it and consequently its inability to set 24 December as the day for voting despite its full technical readiness to complete the operation on the mentioned date.’’

Meanwhile, the HoR Election Committee formed by the HoR to communicate and follow up with HNEC and the Supreme Judicial Council (SJC) has invited Ageela Saleh to resume his role as Speaker of the HoR in order to oversee a new political roadmap and presumably a new election date.

There will now probably ensue a public round of the blame game as the HoR and HNEC attempt to to make the other the baddie in the postponement of the 24 December elections.

Critics will say HNEC head Emad Al-Sayeh should have done more publicly in blaming the HoR head Ageela Saleh and the HoR for their poor election law. Sayeh should have called Saleh out earlier and more forcibly. He shoud have spelled it out: the election law won’t work.

Did Saleh design the election law to fail?

But the most blame should be apportioned to Saleh. He had handcrafted the election law in his smoke-filled rooms without allowing the floor of the HoR to discuss the final draft presented by the Committee.

Saleh’s critics say that was his plan all along. They claim Saleh knows in his heart of hearts that he may not be re-elected to parliament and that he will almost certainly not be re-elected as its head. The status quo and avoidance of elections is Saleh’s natural choice. The red herring to many was that Saleh stood as a candidate in the presidential elections. This was a good distraction, giving the impression that he wanted the elections to go ahead.

The hope is that the international community does not fall for Saleh’s tricks again in the next efforts to get the elections back on track.

HNEC is probably being political if not disingenuous by proposing the 24 January. It knows that Ageela Saleh and all the pro-status quo forces who seek to avoid elections will stretch out the process of agreeing a new election date. If things move relatively smoothly even 24 February would be unrealistic. The 24 March is a much better bet – and an optimistic one at that too.

What needs to happen next?

For elections to go ahead now there must be a clear election law. The HoR needs to either enact a new law or amend the current law – with a change of date. This new law must clearly delineate the powers and authority of HNEC and the Supreme Judicial Council/courts.

There must be no ambiguity in the interpretation of the electoral law. The two must not step on each other’s toes and HNEC’s authority must not be undermined by the courts. The electoral law had set a list of criteria and HNEC had disqualified several candidates.

These included Saif Qaddafi (still wanted by the International Criminal Court) and Prime Minister of the Libyan Government of National Unity, Abd Alhamid Aldabaiba. There were questions regarding the accuracy of some of the information provided by the later in his application form.

The new election law should spell out its criteria even more clearly.

For this to happen there needs to be another merry-go-round of visits, meetings and photo opportunities by world leaders, ambassadors and above all the effective head of UNSMIL, Stephanie Williams.

The international community must coerce the status quo Libyan stakeholders who are resisting the holding of elections – including a bloc in the HoR led by Ageela Saleh – to stop playing at holding elections and actually allow fair and transparent elections to go ahead.

UNSMIL calls for adoption of suggested amendments to election laws and for simultaneous elections on 24 December 2021 | (libyaherald.com)