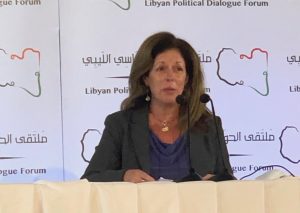 UNSMIL welcomed yesterday the arrival of Special Adviser to the United Nations Secretary-General (SASG) for Libya, Stephanie Williams in Tripoli on 12 December 2021.

In close coordination with UNSMIL, Williams will lead the good offices and mediation efforts and engagement with Libyan, regional, and international actors to pursue the implementation of the three intra-Libyan dialogue tracks and support the holding of presidential and parliamentary elections, UNSMIL said.

Williams will work with Libyan actors to help them sustain the momentum created for national elections by the unprecedented voter registration turnout, successful distribution of voters cards, and registration of a high number of presidential and parliamentary candidates, the statement continued.

UNSMIL said it commends the work of the High National Election Commission, which has achieved significant progress in the technical preparations of the electoral process despite many challenges and time constraints.

Libyans have suffered long enough due to conflict, fragmentation, and division of institutions.  The Libyan people deserve the opportunity to choose their leaders through the ballot box.  Working in close collaboration with the Special Adviser and other international partners, UNSMIL will continue to support an electoral process that can deliver unity, stability, and legitimate institutions in the country, its statement concluded.