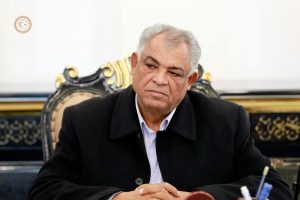 First Deputy PM Hussein Gatrani has returned to Tripoli and to his role after falling out with Aldabaiba and his GNU last year (Photo: GNU).

The First Deputy Prime Minister, Hussein Gatrani, arrived at Tripoli’s Mitiga Airport yesterday to resume his work from his office in Tripoli. Gatrani is the eastern representative in the Abd Alhamid Aldabaiba-led Libyan Government of National Unity (GNU).

Fall out with Aldabaiba’s GNU

This is his first official visit to Tripoli since he fell out in a spectacular fashion with Prime Minister Aldabaiba in October last year.

Gatrani had withdrawn from the GNU, accusing Aldabaiba of a number of failings, the most important of which was Aldabaiba’s failure to run an inclusive government of national unity that treated eastern Libya fairly in the distribution of power, influence and government posts. He objected to Aldabaiba’s dictatorial style of government and failure to pay the eastern-based Libyan army’s salaries.

He claims that his return came after vigorous efforts made by the Second Deputy Prime Minister, Ramadan Abujanah, a number of ministers of the National Unity Government and members of the House of Representatives, at the invitation of some sheikhs and dignitaries of the western region, to reach a satisfactory settlement and to resolve all outstanding problems between him and Aldabaiba.

The move is seen as a positive one in terms of delivering more services to eastern Libya. It is also seen as strengthening Aldabaiba’s hand and reducing the likelihood of an alternative government being set up in eastern Libya. To this end, it is seen as weakening Khalifa Hafter and Bashagha’s hopes of bringing down the Aldabaiba government in the short term.

In response to Gatrani’s eastern Libya statement, UNSMIL calls on GNU to address grievances and all parties to engage in constructive dialogue within LPDF’s Roadmap | (libyaherald.com)