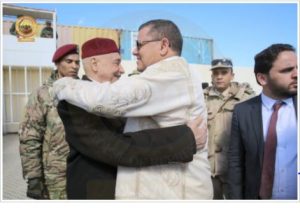 Caretaker Prime Minister Aldabaiba has fallen out with HoR Speaker Ageela Saleh. Saleh has withdrawn confidence in Aldabaiba’s government and is planning to replace him today (Photo: HoR Tobruk).

There was a failed assassination attempt on Libya’s Caretaker Prime Minister Abd Alhamid Aldabaiba in the early hours of this morning, Reuters reports. Several Libyan media outlets are also reporting the incident.

Aldabaiba was unharmed and photos circulated by Libyan media of the purported assassination attempt show superficial damage to the windscreen of his bulletproof car. They were caused by shots from another a vehicle that subsequently fled. Aldabaiba was reportedly on his way home.

Reuters quoted an anonymous close source to Aldabaiba saying it was ‘‘a clear assassination attempt’’. At the time of writing no there has been no independent verification of the incident. There are also no reports of those responsible for the alleged attempt.

The alleged Aldabaiba assassination attempt on Aldabaiba comes within the context of the Libyan parliament (the House of Representatives – HoR) planning to replace him in its session today. The HoR believes Aldabaiba’s term in office expired when Libyan elections failed to take place on 24 December 2021. Aldabaiba insists the terms of the Geneva Libyan Political Dialogue Forum’s (LPDF), which brought him to power, prescribe that he remains in office until elections produce a new prime minister. UNSMIL and the leading Western nations agree with Aldabaiba.

If the assassination attempt is genuine, it could herald a period of further political and military instability in Libya over the struggle to rule Libya and have legal and corrupt distribution access to its rentier state wealth.

I will not hand over power to the military and Muslim Brotherhood: Aldabaiba | (libyaherald.com)

Aldabaiba refuses to give up power to new prime minister to be chosen by HoR on Thursday | (libyaherald.com)

Hafter’s war on Tripoli: One year on, no progress and no resolution. EU and UNSMIL continue call for truce – but without any effective action | (libyaherald.com)

New prime ministerial candidates to make presentations to HoR next Monday – PM to be chosen on Tuesday | (libyaherald.com)

New prime ministerial candidates to make presentations to HoR next Monday – PM to be chosen on Tuesday | (libyaherald.com)

HoR decides to exclude HSC from input in appointing Libya’s next prime minister – the whole continuing role of the HSC brought into question | (libyaherald.com)

Road Map Committee must set deadline for holding elections – with or without a constitution | (libyaherald.com)

Fifteen HoR members call for the formation of a new technocratic government and an investigation into the current ‘‘corrupt’’ government | (libyaherald.com)

Statement by the Governments of the United States of America, France, Germany, Italy, and the United Kingdom | (libyaherald.com)

UK clarifies its position on Libyan elections and Libya’s caretaker government in the meanwhile | (libyaherald.com)

HoR to present a mechanism for selecting a new Libyan government and prime minister tomorrow | (libyaherald.com)

Statement by the Governments of the United States of America, France, Germany, Italy, and the United Kingdom | (libyaherald.com)

UK clarifies its position on Libyan elections and Libya’s caretaker government in the meanwhile | (libyaherald.com)