The first Italian-Libyan Friendship awards, the Marcus Aurelius Arch Awards, held al fresco under and around the AD 165 (opened) Roman arch, attracted a few hundred of the capital’s elite on Friday evening.

The inaugural event, which is planned to become an annual fixture, recognises Libyans and Italians who have contributed to Libyan-Italian relations in several categories, including culture and media.

The event included the multilingual theatre performance by the Khoms National Theatre of the play ‘‘Here We Are’’ co-written and co-performed by with the Italian Un Altro Teatro company.

The event, heavily guarded by security personnel, was meant to take place on the Libya-Italy Friendship Day on 30 August. However, the militia clashes a few days earlier led to its postponement.

Nevertheless, the event was a landmark cultural event in the capital and the country in view of recent security infringements. It sets a positive standard for other embassies to follow with their cultural contributions. 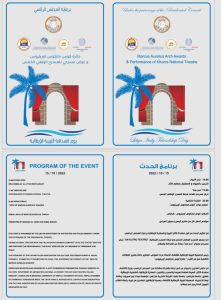