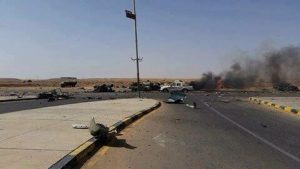 An attempt by Ibrahim Jadhran’s Petroleum Facilities Guard to retake two of the oil export terminals from which they were ousted last week appears to have failed with at least five PFG members killed and vehicles destroyed and captured.

The early morning attack from two directions on Ras Lanuf and Sidra initially met with some success with the PFG pushing into the town of Ras Lanuf.  However the advance was met with airstrikes as well as a counterattack by ground forces.

Colonel Ahmed Al-Gatrani of the Government of National Accord ministry of defence protested that the air strikes had been launched by UAE or Egyptian planes but gave no further details. Injured PFG fighters were evacuated to Misrata Central hospital.

Smoke rose from a fire in a residential area in Ras Lanuf. The army also confirmed that storage tank 12 that had been already been damaged in the Sidra tank farm was also set alight  By the afternoon the army was claiming to have cleared the area around both terminals. Moreover, according to Alwasat after the PFG attack was repulsed the army’s 101 Brigade advanced and seized Bin Jawad, 25 kilometres west of Sidra.

A tanker, the Maltese flagged SeaDelta, which had been lifting the first load of crude from Ras Lanuf since the expulsion of Jadhran’s force withdrew from the port when the fighting started and was this evening still off the coast.

After the army ejected the PFG from the terminals at Sidra, Ras Lanuf and Zuetina on 11 September , it said it had handed control over to the National Oil Corporation.  Today NOC chairman Mustafa Sanalla repeated his call to stop any fighting around the terminals.

“We ask the combatants to avoid taking actions that could damage our vital national infrastructure,” he said. “Our national recovery depends on these ports being open and our oil flowing freely.”

Shortly after the PFG began their attack, Jadhran’s spokesman Ali Al-Hassi told AFP that they were coming under air attack. Pictures released by the army show destroyed vehicle which they said had belonged to the PFG.  There were also reports from members of the PFG who appear to have sided with the army, that some of the attackers had been captured.

Early yesterday oil field offices belonging to Sirte Oil were raided 140 kilometres from Brega. The masked men held up staff at gunpoint and took computers and communications equipment as well as two Toyota pickups. The PFG unit guarding the premises was withdrawn last week after the army seized the terminals.

In a separate development today, it is being reported that army units had moved into the Jufra airbase. This appears to be a reoccupation of the position first taken over in April from which units were clearly withdrawn at some point.