By Moutaz Ali in Tripoli and Sami Zaptia in Tunis. 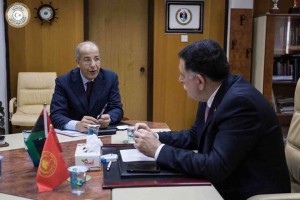 There are reports that the Tripoli-based Central Bank of Libya (CBL) Governor, Saddek Elkaber, is about to be replaced as his tenure in office comes to its natural end this month.

Highly placed sources at the CBL have told Libya Herald, however, that it is very unlikely that Elkaber would be replaced at this juncture in time in view of the political division of the country.

They pointed out that according to the Libyan Political Agreement (LPA), the CBL Governor would need to be agreed upon by both the Tobruk-based House of Representatives, as the sole legislative Libyan body, as well as the High State Council in its advisory role.

They also felt that the international community would have more leverage in influencing the CBL Governorship role as the nature of the position relies on cooperation with the international community. They felt that the status que would be the best step for such a sensitive position and that a change would be very destabilizing to Libya at this time as it could open further existing divisions.

The sources felt that the increased media chatter was sparked by combination of the nearing of the end of Elkaber’s tenure and as a result of the statements and leaked documents from the High State Council.

It will be recalled that on Sunday the Abdelrahman Swehli-led High State Council had announced that it planned to appoint top military and civilian positions, including the heads of the armed forces and the governor of CBL.

The announcement came in spite of national and international rejection of the its unilateral assumption of the legislative powers of the House of Representatives, as set out in the UN-brokered LPA signed in Skhirat in December 2015.

The Council’s second deputy president, Mohammed Mazaib, had told its Counter-Terrorism, Security and Stability Committee to prepare a law within a month on powers of the Supreme Commander of the Libyan Army and other leading army positions.

He had also instructed the Political Agreement Implementation Committee to make nominations for the governorship of the CBL, the chairmanships of the Audit Bureau, Administrative Control Authority, Anti-Corruption Authority and the High National Elections Commission, as well as the presidency of the Supreme Court and the post of Attorney General.

The move to appoint the civil posts has been triggered by the view that the appointment of Saddek Elkaber as governor of the CBL expires on 26 September. He was appointed by the former General National Congress in 2012.