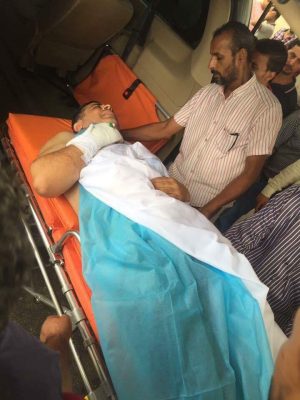 An assassination attempt on the acting head of the Tripoli CRA today (Social media).

There was an assassination attempt on the acting head of the Tripoli-based Civil Registry Authority (CRA), Siddiq Al-Nahaisi, in the capital today.

Nahaisi was shot at and received a bullet in the stomach and one in the hand. He was rushed to the main Zawyia Street hospital in central Tripoli where reports at the time of writing say he is stable.

A work colleague at the CRA office in the Drebi area of Tripoli was also shot receiving a wound in the head but is also said to be stable.

Reports say that three armed individuals ‘‘wearing army fatigue’’ and in a ‘‘military vehicle’’ attacked the CRA headquarters in Drebi firing at all the offices ‘‘in a random manner’’.

Speaking later to Libyan media, the head of the CRA Mohamed Buker said that this was part of a continued attempt by various powers to gain access to the CRA database.

The PC/GNA Ministry of Interior released a statement this evening saying that it is investigating the incident and pursuing the criminals and referring them to the courts.

It will be recalled that the CRA has been at the heart of Libya’s troubles suffering kidnappings, armed attacks and murders.

Only in September, the CRA had announced that it was suspending all work in the west, east and south of Libya after two of its employees had been kidnapped. The suspension was to continue until the employees are released.

The CRA statement had not reveal when exactly they were kidnapped, but reported that its engineers, Abdulsalam Al-Khweldi and Sami Al-Biskri, were kidnapped in the Suq Al-Juma area of Tripoli.

In its statement, the CRA had complained about the continuing kidnappings, forced arrests and assaults. It called on all relevant bodies charged with safety and security to ‘‘accept their responsibility in providing security for employees carrying out their duties’’.

The statement also warned those carrying out these acts to stop playing around with the CRA, which it had referred to as ‘‘a very important institution which represents national security for the Libyan citizen’’.

The CRA has now been very much at the centre of multiple kidnappings as it has got itself unintentionally, but nevertheless inextricably, embroiled in Libya’s political split and polarization since the militia coup in Tripoli in the summer of 2014.

Only in July this year, he CRA reported that two of its employees, including the manager, were kidnapped in the southern town of Murzuq and later their bodies were discovered in a quarry.

Meanwhile, in March this year, the CRA had revealed that it had been forcibly taken over by ‘‘ideologically extremist groups’’ who had taken control of its database of Libyan citizens which would have ‘‘enabled them to control the affairs of Libyans and the manipulation of their identities for their own interests’’.

The Authority had feared that the ‘‘armed militias with suspicious agendas’’ would ‘‘tamper with the database’’ or commit ‘‘forgery and vandalism’’.

Furthermore, in April, Abdelgader Alsaity, Deputy head of the CRA, had accused ‘‘outlaw militias” in Tripoli of attempting to gain access to and control of Libya’s national civil registry.

Alsaity, based safely in the east of Libya away from militia coercion, had said that on 31st March five CRA employees were kidnapped from their workplace at Libya Telecom and Technology (LTT), Libya’s main state ISP.

He had further revealed that they were kidnapped by militias in control of Libya’s intelligence service representing the internationally unrecognized Tripoli government.

Two of the kidnapped were foreign IT technicians, Indian Reji Joseph and an Egyptian Hussam-aldeen Mohamed. Reji and Mohamed were subsequently released in July.

The two IT engineers were charged with trumped up charges and made appearances in Tripoli’s main court complex. ‘‘They were treated very badly in court, hooded, and not allowed to speak to lawyers or their families. Their lawyer said that in her ten-year career she had never seen anything like this. A complete disrespect for law and their human rights’’, an IT source close to the whole saga had told Libya Herald.

Alsaity had said that the militias had planned to take the technicians to the LTT offices where the CRA server is housed in an attempt to gain access to its contents.

Alsaity had named the Bab Tajura militia led by Alazhari as the responsible party who he had accused of taking the kidnapped technicians to the Salvation government intelligence headquarters led by Mustafa Noah. The incidents had threatened to split the CRA between west and east.

However, in June this year, the CRA had announced that the western and eastern divisions had reached a compromise and that the CRA had resumed its services in western Tripoli after having been suspended since March.

The Tripoli-based CRA had been forced to revert to paper-based services during the dispute over who controls Libya’s registry of families, marriages, births, deaths, passports etc.

However, a compromise has subsequently been reached. The database has now been located in a ‘‘neutral location’’, maybe even outside Libya, but both eastern and western Libya can have access to it, the Libya Herald was informed.

Initially, western Libya authorities refused to use it unless it was located physically under their control. However, eastern Libyan authorities do not trust their western counter parts fearing it would politically misuse or alter the database, a well-placed source told this publication.

This fear is not far-fetched in view of the fact that the two sides are politically, and at times, militarily at war with one another. In view of the false documents discovered after the US bombing of IS in Sabratha, there was a realistic fear that western Libya may have issued ID or passports to extremists or terror groups, the source had told the Libya Herald.

The eastern authorities are also demanding that those responsible for the kidnapping of the CRA IT technicians are held to account. Tripoli created their own system giving them access to the same database from the west. The east has its own access system to the shared system. It is expected that the kidnapped IT engineers would be released soon.

A well informed IT source had told this newspaper ‘‘it is on a unified database with a main replication to the disaster recovery site, but it looks like Tripoli are going to be using their own frontend application that interfaces with it whilst the east are going to stay with the same system’’.

Underscoring the powerlessness of Serraj and his Presidential Council/Government of National Accord, the source had said in June ‘‘Let’s face it, (Former Salvation Government PM) Ghwel is still in charge since Serraj is stuck in Busetta [Naval Base].

‘‘The eastern CRA management were very wise in handling the situation. Yes, they compromised by allowing Tripoli to use their own system, but they are still united in access to the same data. There is no split!’’

‘‘To the normal citizen, everything works. But if you look at it from a technical standpoint, it is a distributed, decentralised system now’’, the source had concluded.