Impassioned appeal for Libyan unity by Maltese FM at Libya Dialogue meeting in Valletta, but minimal expectations of breakthrough 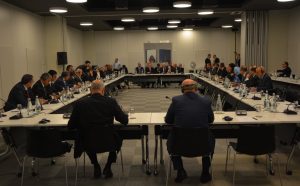 In yet another international gathering on Libya, members of the UN-brokered Libya Dialogue team meeting today in Malta to try and find the means to break the present gridlock over the Libyan Political Agreement (LPA) heard Maltese foreign minister George Vella make a heartfelt appeal to Libyans to find a solution to the crisis.

“Do it, not for us, but for yourselves, for your children, for your country and for future generations. Reason should prevail over hard-headedness, hope over fear, and dialogue and understanding over fighting and violence,” he said in his welcoming address.

However, despite UN special envoy Martin Kobler tweeting today that the meeting was “extremely important” because the situation in Libya was “precarious and very difficult”, there has been little hope expressed by participants or key players in the Libyan drama that this or any other internationally organised gathering will provide a way foward. On the contrary, it was dismissed in advance as a waste of time by some Libyan political players, notably from the east of the country.

Kobler is convening the Malta gathering.

There have been suggestions that the Dialogue members may try to amend the LPA in order to make it more acceptable to the House of Representatives which has to approve it. However, the UN Support Mission in Libya (UNSMIL) says simply that the aim of the two-day gathering is to take stock “of recent political and security developments on the ground, identify key challenges and propose measures to overcome the serious obstacles facing the implementation of the Political Agreement”.

Rumours that the Presidency Council would announce its latest proposed Government of National Accord to coincide with the meeting are also being discounted.

In his speech the Maltese foreign minister said Libyans had to find a way to make the LPA acceptable to all sections of society. He warned of the dangers if there were no solution, pointing to recent talk of partition. This, he said, would be catastrophic for the country.

“All efforts must be dedicated towards preserving the total unity and territorial integrity of Libya,” he said.

There has been a series of meetings on Libya outside the country in recent days, all of them hoping to help ease the way to a solution. Three weeks ago, in Niamey, neighbouring states discussed what they could do to help. There were then tripartite talks in Cairo between the UN, the African Union and the Arab League on coordinating policy towards Libya. This was followed, ten days ago, with a grand gathering in London including Presidency Council leader Faiez Serraj and US Secretary of State John Kerry to look at Libya’s financial situation. Then, earlier this week, there was an African Union mini summit on the crisis.

Next Tuesday, the European Union and NATO will hold their own meeting in Brussels to coordinate policy on Libya while a further gathering is scheduled for Rome two days later to work out financial details arising from the London meeting.

The proliferation of such international meeting has, however, not been matched by any sense among Libyans that a breakthrough is on the horizon.