Suq Al-Hout and Sabri (map based on Google Earth)

In a sign that the army seems confident that it has broken the back of Islamic militant resistance  in Ganfouda, Saiqa Special Forces commander Wanis Bukhamada has been given the job of retaking Benghazi’s Sabri and Suq Al-Hout areas.

Bukhamada, whose men last week overran the Gwarsha Gate, for years the symbol of the Ansar Al-Sharia terrorist presence in the city, has not yet commented on his new objective. However, artillery fire today appeared to be softening up the area which has many narrow alleys and a series of high buildings from the tops of which snipers have been operating. It is also believed that the neighbourhood is extensively booby-trapped and internal connecting passages have been knocked through many buildings.

Although the army retook the port last year the adjacent Suq Al-Hout and Sabri areas have remained in terrorist hands.  Reinforcements and supplies have in the past managed to get through to the Sabri beach. 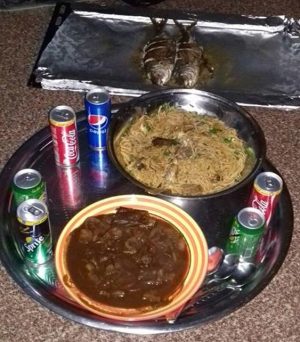 In addition local fishermen have continued to catch fish either from the shoreline with nets or lines or in small boats. A photo published recently on a BRSC website claimed to show how well the “besieged” fighters in Sabri were living, with fresh fish and a pasta dish as well as fizzy drinks.

However the maritime lifeline for Ganfouda and Sabri/Suq Al-Hout= may now be interdicted. The army claims that naval patrol boats intercepted a supply run early this morning some 35 kilometres off the Benghazi coast. Reports vary, but two boats, one of them apparently carrying fuel, may have been sunk in the engagement.  No photographs of the action have been issued, the armed forces merely putting out a file photo of a heavy machine gun being fired from a patrol vessel.

This loss comes on top of the October sinking of two vessels which the Benghazi Revolutionaries’ Shoura Council admitted belonged to them, when they were tied up at the quay of Misrata’s Libyan Iron and Steel Company works. This was the second such sinking at that quay.