After victory, the clear-up in Sirte 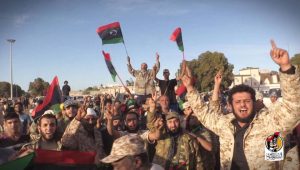 The heady moments of victory in Sirte (Photo:BM)

After Tuesday’s euphoric victory celebrations, those Bunyan Marsous fighters who are not heading home, at least for some leave, have settled down to sorting through the wreckage of the former IS terrorist stronghold of Sirte.

There are different figures for the number of bodies, including women and children, found among former terrorist positions. The Red Crescent said that it had identified 230 corpses that were clearly those of terrorist fighters. It has also discovered 36 other bodies. Some of these were in an advanced state of decay, suggesting that they had been dead for some time.

However the BM operations room has said that 483 bodies had been recovered. The discrepancy may be explained in part because engineers are still combing buildings for mines and booby traps. These men might have found more dead in areas which are still closed off to the Red Crescent teams.

It has become clear that in the final hours of the eight month battle, individual BM fighters were still prepared to run the proven danger of female suicide bombers by bringing civilians to safety, sometimes running in view of the enemy,  carrying terrified children and babies. One picture shows a man holding up his hands to his comrades begging them not to fire as he leads a black-garbed woman out of the rubble. The woman’s face is uncovered, showing that she is gaunt and distraught.  Some 100 women and children are reported to have been discovered in the final three days of fighting.

It remains unclear how many IS men were captured alive. Numbers range between seven and twenty. There was a report on Wednesday that a wounded terrorist blew himself up as he was approached. None of the BM men who had found him was injured.

Presidency Council chairman Faeiz Serraj called a meeting of BM commanders yesterday where he congratulated them on their victory. 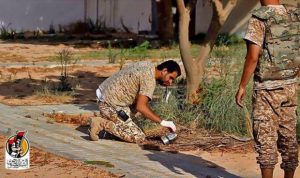 “Many months” of dangerous work remain for de-miners (Photo: BM)

Attention now turns to Sirte’s population, once 90,000 strong, and their return to their shattered town. Large areas have suffered substantial damage and the Ghiza district where the terrorists made their final stand is utterly destroyed.

UNSMIL and the international community have been pressing the PC for an immediate start on rebuilding both Sirte and those districts of Benghazi also devastated in anti-terrorist fighting.  Given its current lack of funds even for state salaries, this may be difficult for the Serraj government to do. Besides, one de-miner heading to the area commented earlier this week that the town and its surrounding area could take many months to be clear of unexploded ordinance.