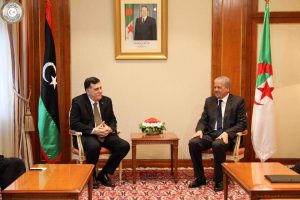 Libya’s head of the Presidency Council and Prime Minister-elect of the Government of National Accord Faiez Serraj arrived in Algeria today for an official visit in response to an Algerian invitation.

The visit was part of the continued rounds of consultations between the two neighbour countries seeking a positive solution to the current Libyan political problem which has been at an impasse for over a year – since the signing of the UN-brokered Skhirat agreement on 17 December 2015.

Serraj commended the Algerians for their support of the GNA and said Algeria’s recent reception of a number of Libyan officials came in the same context. He renewed his call for all parties involved to sit down at the dialogue table in order to solve all problems away from external interference.

Serraj was referring to the recent visits

to Algeria of both Khalifa Hafter and Ageela Saleh, who were also invited by the Algerians. The invitation is part of a new initiative by Algeria to try and find a solution to the Libyan crisis, independent of that by the international community, and based on a new Libya-Libya dialogue.

In pursuit of this, Algiers is reported to be talking to or planning talks with a number of key political stakeholders on all sides of the divide.

An Algerian official was quoted as saying that “the only alternative remains the political solution based on the inclusive inter-Libyan dialogue and national reconciliation, which Algeria works for.”

“The importance of an inclusive inter-Libyan dialogue which leads to a solution to the crisis and to national reconciliation was emphasized,” the Algerian state press service quoted a government official saying.

Meanwhile, Algeria’s Foreign Minister Ramada Lamarma was reported in Algerian media on Saturday saying that the international community had failed to stand by the new Libyan authorities and had not assisted in rebuilding strong Libyan institutions. He also criticised foreign intervention in Libya with various agendas.