Any contract to rebuild Tripoli airport would be illegal: HoR member Salah Suhbi 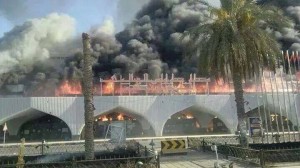 Any contract signed by the Libyan state to rebuild Tripoli International Airport (TIA) would be illegal and unconstitutional as it would not have followed the necessary due procedure, House of Representatives member for Rujban Salah Suhbi said.

Suhbi was referring to Government of National Accord (GNA) Transport Minister-designate Milad Matoog’s comments confirming that an Italian company will commence work on TIA early in 2017.

Matoog had made the statement speaking at a forum on the Libyan transport sector held in Tripoli last week organized by the Libyan African Aviation Holding Company – which owns both the main state airliners, Afriqiyah Airlines and Libyan Airlines.

Matoog gave no details on the rebuilding project of TIA nor on the alleged Italian construction company. Libya Herald’s request for further information on the Italian company from the Italian embassy based in Tunis have had no responses. Sources have told this paper that it was more likely that it was Italian individuals involved with the project rather than companies or a consortium.

In October last year an alleged consortium of Italian companies specializing in airports had visited the remains of the destroyed TIA, the Libyan Airports Authority (LAA), part of the Libyan Transport Ministry had reported. It did not name the consortium.

They had been accompanied on the TIA visit by the chairman of the LAA and the General Manager of TIA. The LAA had said that the consortium had conducted a field visit to conduct a survey of the site with a view to construct a passenger terminal and other amenities.

The LAA had said that the Italian consortium would present an offer for the reconstruction of TIA.

It will be recalled that TIA was destroyed during inter-militia fighting in summer 2014 when the GNC-Misratan-backed militia, Libya Dawn, attacked Zintani militias controlling the airport and totally destroying TIA.

Commenting on the alleged deal, House of Representatives member for Rujban Suhbi told this publication that ‘‘This is what corruption and pay offs look like. They have no right legally or constitutionally’’ to award this contract.

The GNA, he continued, ‘‘is a rejected cabinet by parliament (HoR), and even if so, when was the public tender for the TIA contract announced? When were the results received and transparency of the award process confirmed?’’

Suhbi then went on to accuse the Faiez Serraj Presidency Council and its Government of National Accord of being a criminally-supported thieves based in western Libya.

‘‘The Presidency Council and all the western criminals supporting it are ripping off what’s left of Libya’s money. They will all face legal action, local and international. They are thieves!’’